Apparently, pizza is a hotly debated topic. And for the record, I have always loved pineapple on my pizza. However, one of the oldest debates regarding this delicious food has nothing to do with a specific topping.

Rather, the split has been between deep-dish pizza and the more traditional, less-thick variety. So which one is better, Chicago-style pizza or New York-style pizza?

What is the Difference Between Chicago Style Pizza and New York Style Pizza?

Chicago-style pizza is commonly understood to be another way of referring to deep-dish pizza. Deep-dish pizza is identifiable by its high crust, usually about 2 to 3 inches tall.

The pizza’s signature height creates enough room for tons of cheese, tomatoes, and layers of additional toppings. A Chicago-style pizza is baked in a round pan that’s tall enough to allow the dough to expand and grow.

New York-style pizza is most often characterized by its thin crust and is typically served in wide, individual, slices. While New York style pizza crust is thin, it’s not so thin that you feel like you’re eating the box it came in.

It’s perfectly thin–just enough to fold over so that you can eat it and walk at the same time. Also, New York pizza is sold by the slice all around New York City making it convenient as well as delicious.

For this round, let’s consider the anatomy of a pizza to compare the differences between Chicago and New York styles. 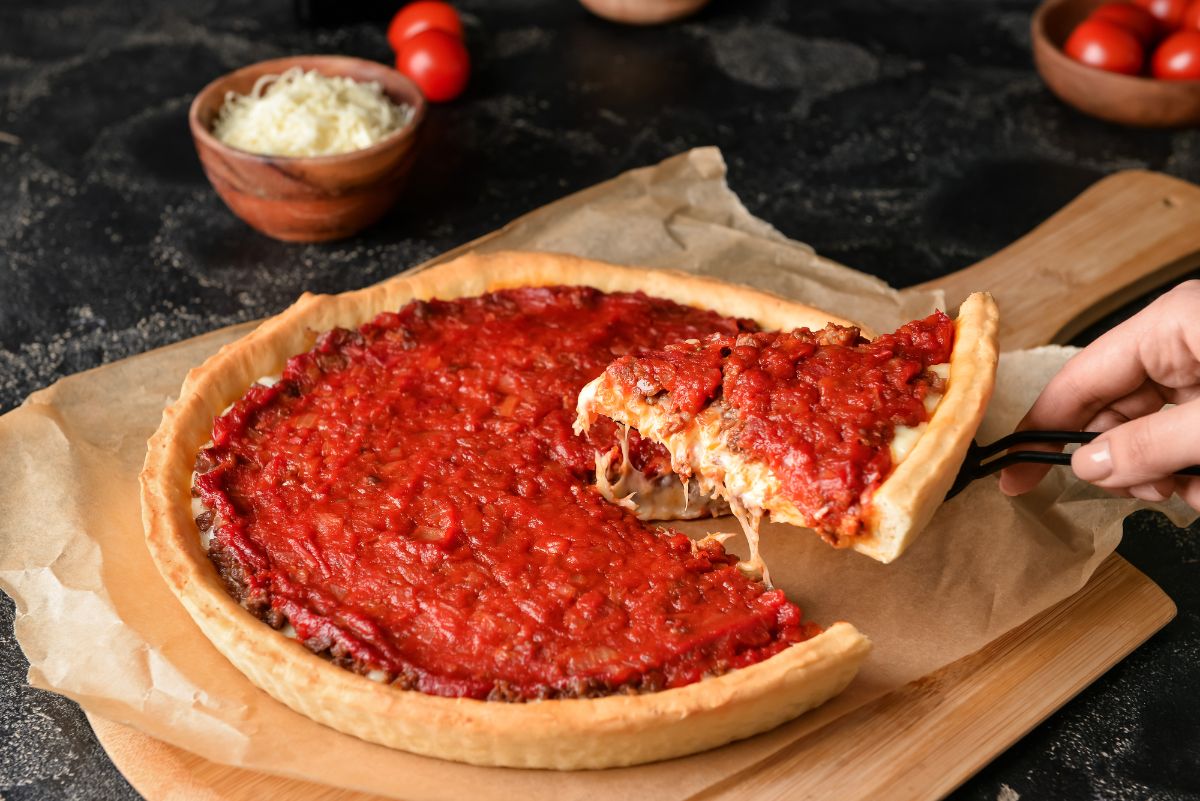 Chicago-style pizza has a thicker, taller crust and is less similar to what you might consider a typical slice of pizza.

New York-style pizza has a thinner crust and looks more like a slice of pizza which may be picked up and eaten anywhere.

One thing I noticed about New York-style pizzas is the grease and not in a bad way either. Chicago-style pizza however, is loaded up more with cheese and chunky tomato sauce.

The cheese is one of the biggest differences between New York and Chicago pizzas, more specifically, the difference is in the amount of cheese. New York-style pizzas are like traditional pizzas containing one layer of cheese. Chicago-style is deep enough for multiple layers of cheese. 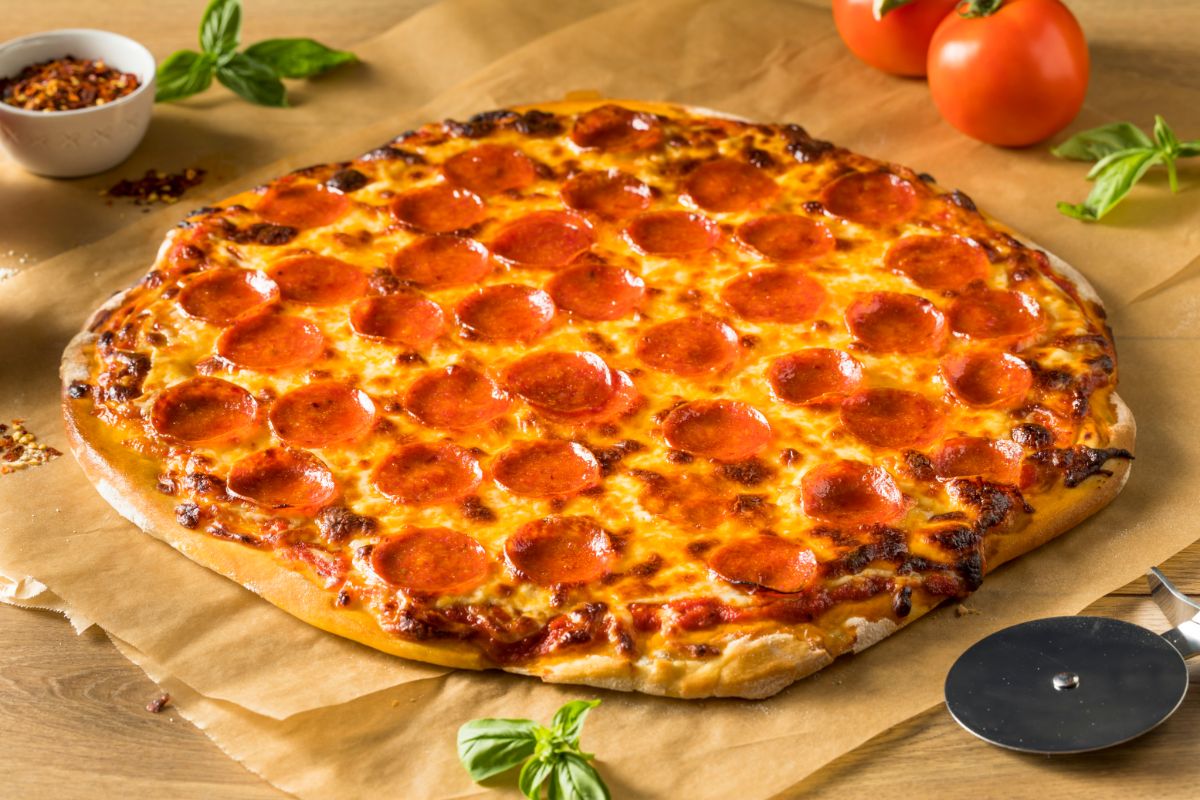 Whether you want pepperoni, olives, mushrooms, or bell peppers, New York pizza will have them on top. However, a Chicago pizza’s depth has enough room for thick layers of toppings several times over.

It’s easy to see why Chicago pizzas take longer to cook. The thick layers of cheese and toppings–there’s simply more stuff to heat through. Plus, the special, deep-dish style crust just takes longer to prepare and bake.

Moreover, Chicago pizzas are cooked in cast iron pans, while New York pizzas are baked in ovens. Overall, the cooking and preparation process is approximately 30 minutes longer for Chicago-style pizzas.

See also  What Is An Artisan Pizza? 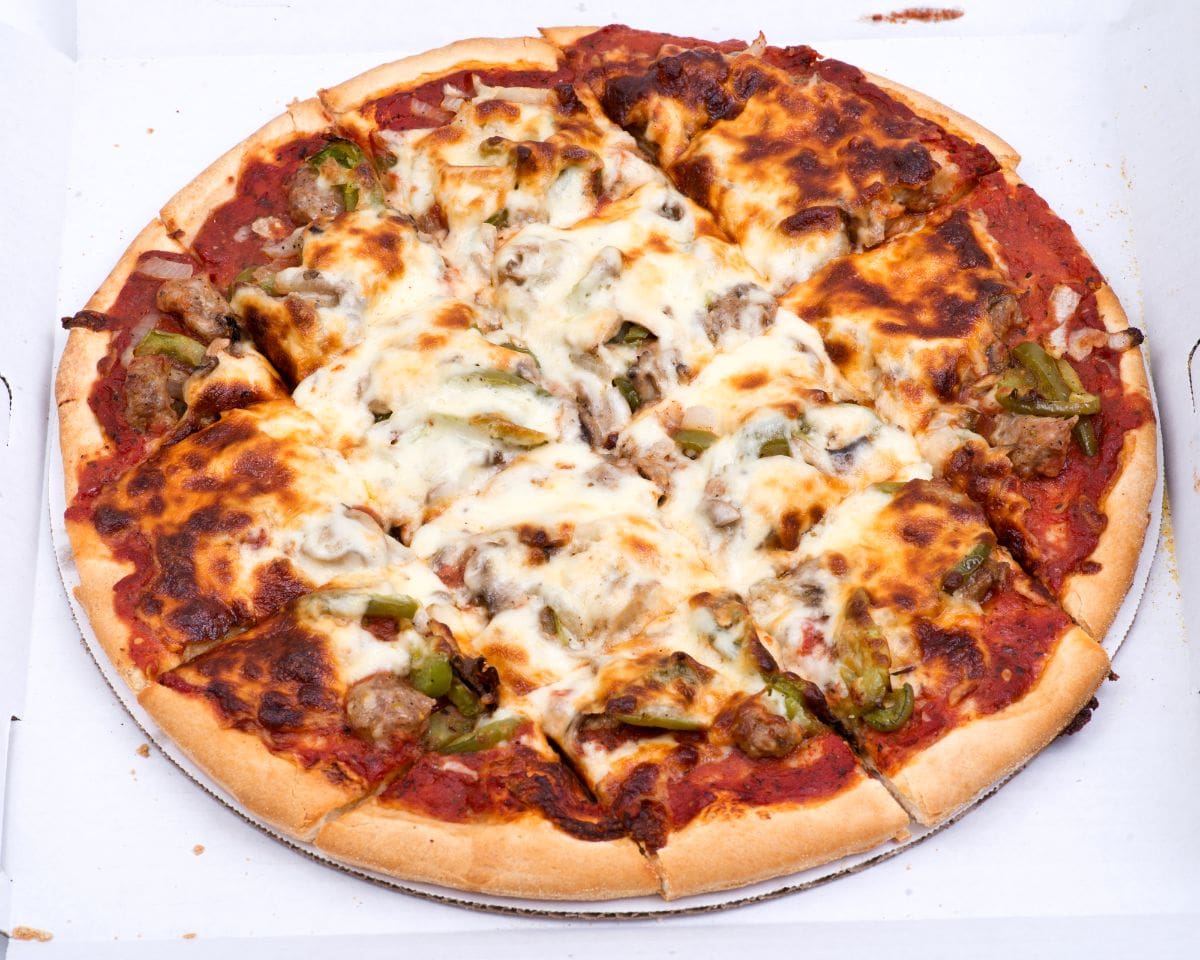 Now here’s where the debate becomes more complicated. Just when I thought Chicago-style pizza was synonymous with deep-dish pizza, I learned that there is a Chicago-style thin crust pizza too. After all, we’re comparing Chicago-style and New York-style here, not deep-dish and thin-crust.

For starters, what makes New York pizzas unique compared to other thin crust pizzas is that while the crust is thin overall, the edges remain a bit thicker and crispier than the rest of it. Honestly, the mechanics of a New York-style pizza just work.

Chicago thin-crust pizza dough is rolled rather than hand-tossed. Moreover, the pizza is cooked longer which results in a crust that’s very crispy.

So can we even agree they are all considered pizza? 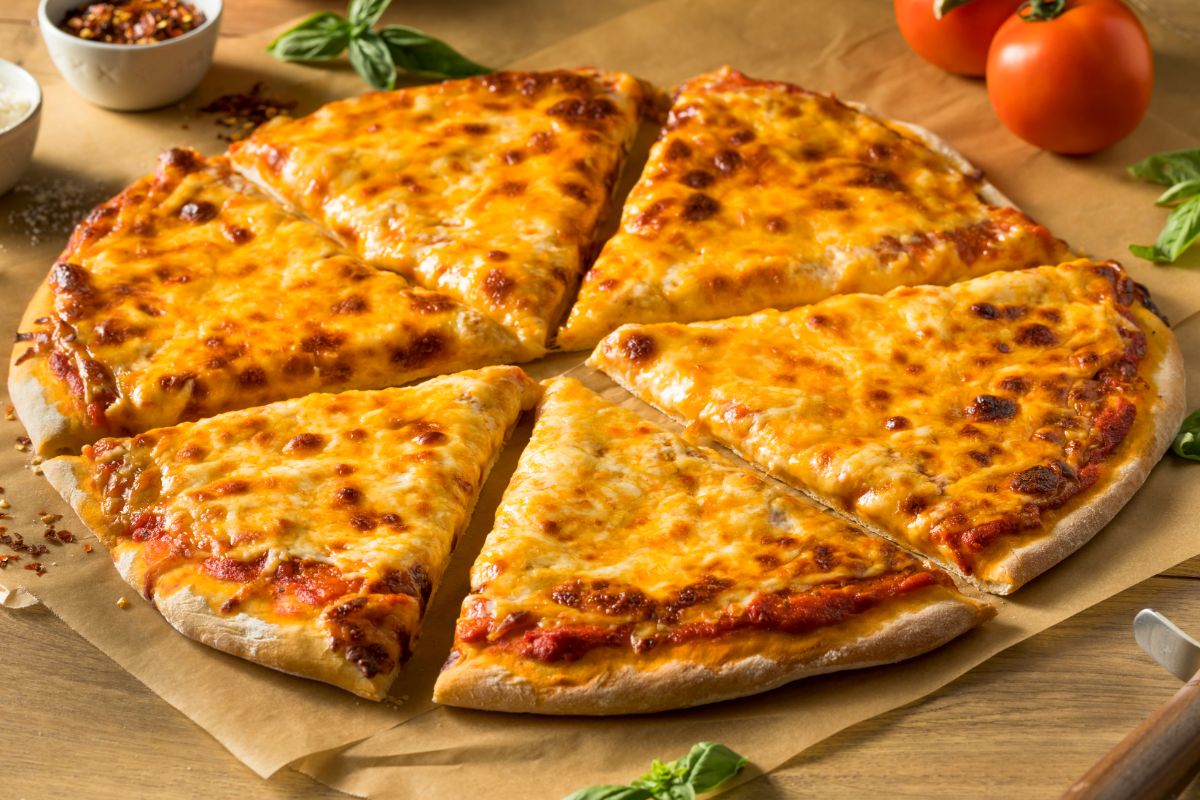 The experience of eating each style of pizza is harder to measure. Let’s just say that if you must eat and run, grab a New York slice of pizza. If you want to sit down and use utensils, go for the Chicago-style pizza because it sort of feels like you’re eating lasagna.

According to Chicago’s official cultural historian Tim Samuelson, there isn’t enough information available anywhere to say where Chicago-style deep-dish pizza was born. At least not with any absolute certainty. But we can surely speculate.

See also  Neapolitan vs Sicilian Pizza: Which is Best for You?

In 1943, Chicago natives, Ric Riccardo and Ike Sewell, opened Pizzeria Uno and have since claimed that their establishment is the place where Chicago-style deep-dish pizza got its start. However, others claim that this specialty pizza was invented much earlier than 1943.

Descendants of Rosati’s Authentic Chicago Pizza restaurant chain have claimed that the pizza has been on their menu since they opened their doors in 1926. But because there’s a lack of existing evidence the world may never know the truth.

Here’s what I learned. According to Career Competencies in Marketing Series, Text-Workbook published in 1945, deep-pan pizza was considered a common menu term that service workers ought to be familiar with.

During this time, pizza in general was not as common as it is today. If Chicago-style deep-dish pizza was indeed born in 1926, would it have been necessary to give it special mention to restaurant staffers an entire 20 years later?

Rather, it seems more intuitive to do that when a menu item is just beginning to peak in popularity. So, if Chicago-style deep-dish pizza got its start at Pizzeria Uno in 1943, relaying its marketing efforts to restaurant employees in 1945 would make more sense. 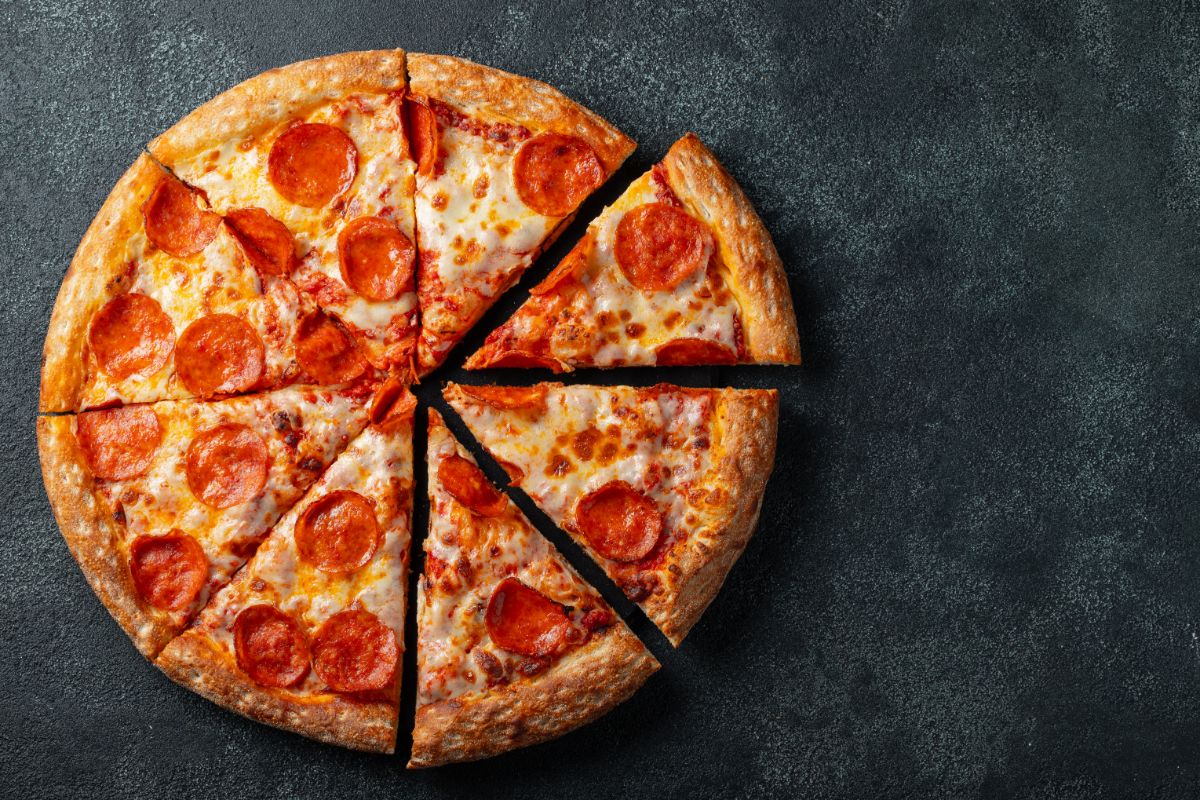 As I’m sure there are holes in my theory, it’s possible that the truth is scattered and perhaps has been lost in translation. For instance, deep-pan pizza is often confused with deep-dish pizza which may have been used interchangeably with Chicago-style pizza. However, they are subtly different.

Deep-pan pizza usually results in a softer, chewier dough than deep-dish pizza. Restaurants might have been serving a combination of the two before deep dish pizza became what it is considered to be today.

In the end, when it comes to choosing a favorite style of pizza, my answer is biased as it should be. On the one hand, I can understand the appeal of Chicago-style pizza because of its many levels. You can get creative and add different toppings between each layer of cheese. However, overall there’s just too much going on. On top of that I’m confined to the table to eat it.

Having family in New York means that I’ve eaten a lot of New York-style pizza. Therefore, I also associate the food with visiting family and walking around New York City which is pretty hard to beat.