The world’s most perfect food – pizza – comes in a number of varieties. You can top it with anything you like, from meats to vegetables to fruits. It comes in numerous shapes, too, and uses more than one type of bread for its underlying crust.

Two types of crust – flatbread and hand-tossed (regular) – pervade the pizza world, although you can use other items, such as a large portobello mushroom, for the foundation of your pizza pie. Let’s look at the two most common pizza crust types and how to make them.

What is Flatbread Pizza? 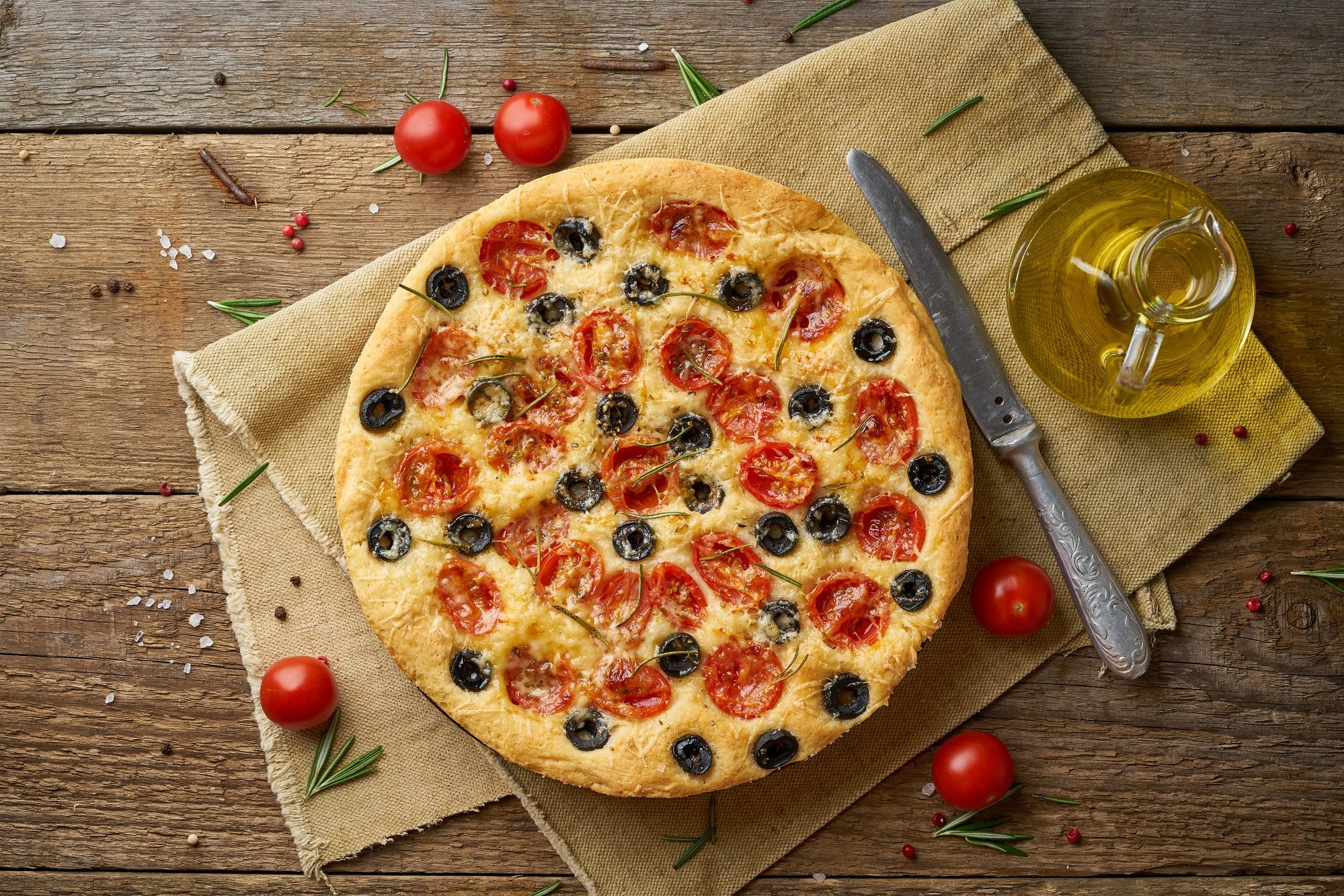 Flatbread pizza refers to a pizza with a crust made of any flatbread – French bread loaf, pita, tortilla, naan, etc.

You top it the same as regular pizza, but because it uses ready-made flatbreads, you can turn almost any existing flatbread into a pizza pie with just a little tomato sauce, toppings of your choice, and cheese, please.

What is Regular Pizza (Hand-tossed)? 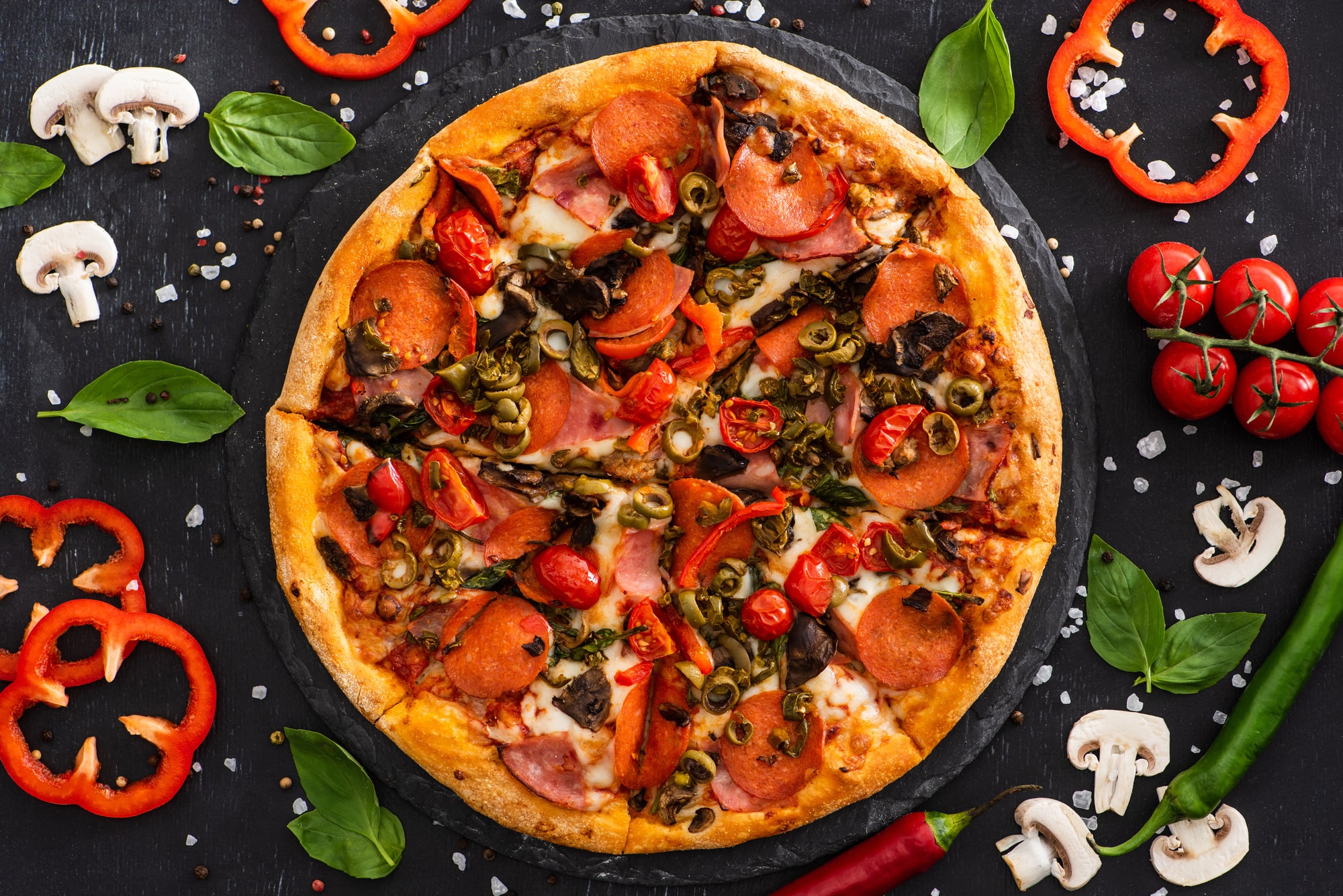 Regular pizza refers to a round or square pizza made with a dough of yeast that you shape by hand.

Shaping the dough, which sometimes includes a showy method of shaping called hand-tossing, helps it rise under the pizza and create a crispy outer crust with a soft, moist center. You can top this type of pizza with any sauce or topping, but you do so before baking the pie.

While you can vary your flatbread pizza depending on the crusty bread you use, you’ll need to change the recipe for your regular pizza crust to change its thickness.

If you want to pile your pizza high with toppings, choose the French bread option. If you want to build an artisan pizza, choose naan, pita, or tortilla bread.

When you order pizza from a restaurant, the menu typically offers hand-tossed dough, pan pizza (deep dish pizza), stuffed crust, and may offer crusts named after cities or countries. These include:

What the Heck do those Location Styles Mean? 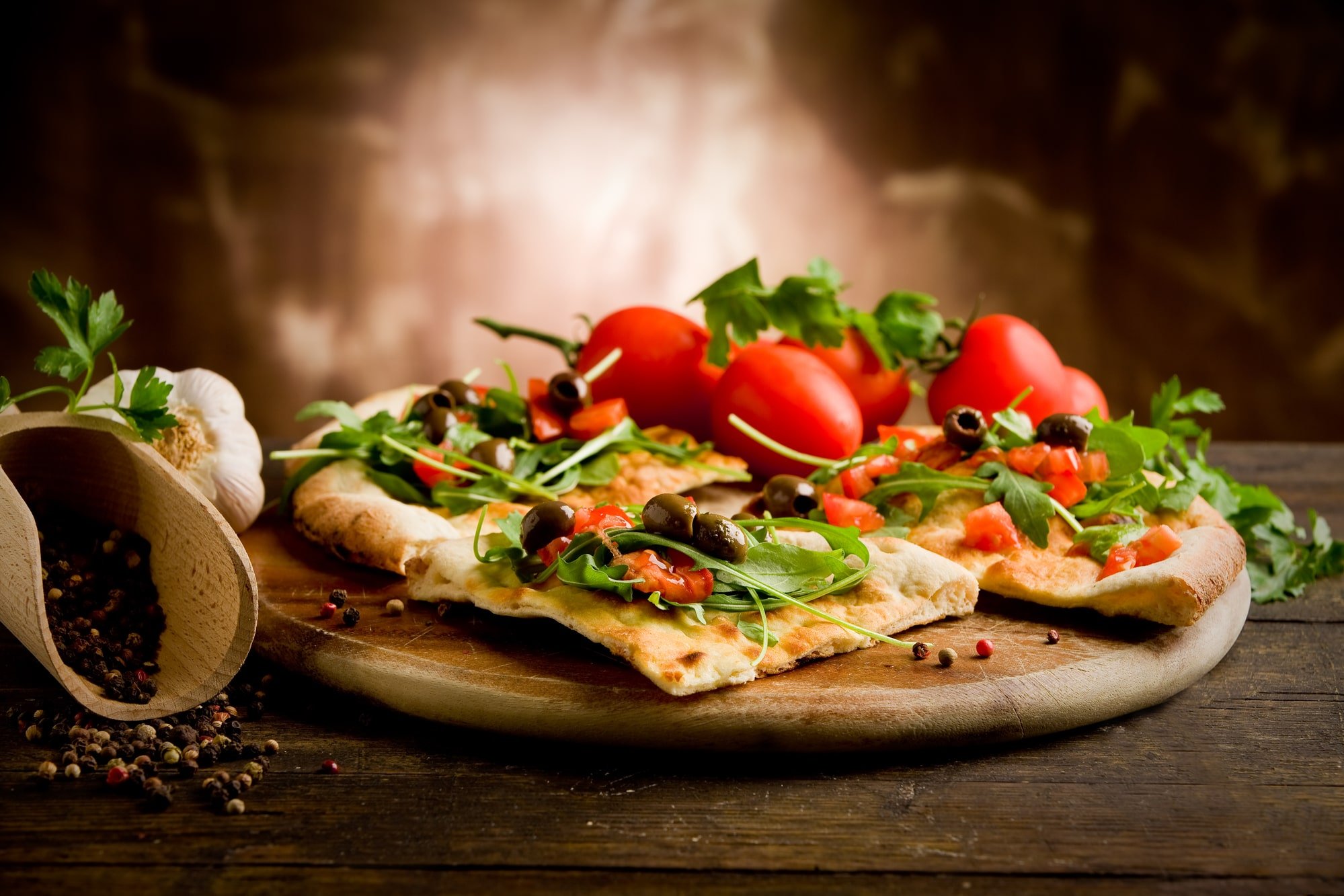 They typically describe the crust type. In Italy, most pizza crust is barely there. The Italians use an exceedingly thin crust and top their pizza with only one or two toppings. There’s variation within Italy, too, though.

For example, Sicilian-style pizza differs from Neapolitan pizza. In Sicily, chefs make pizza with a deep-dish crust in a rectangular pan. Neapolitan uses the crust most pizzerias do but in a traditional pie shape, such as you’d see in an apple pie.

Chicago-style pizza refers to a deep-dish pizza that strays as far from Italian style as possible. Its crust resembles that of a thick pot pie crust. It typically bakes up to a thickness of a quiche.

New York-style pizza falls in between those two with a hand-tossed crust that rises a little, but not a lot. You typically get this type of crust when buying pizza by the slice.

Detroit-style pizza uses a deep-dish pan, but in a square shape, which makes it similar to Sicilian pizza, but not quite the same. Rather than the pie crust shape of a deep-dish/pan pizza, this type of pizza’s crust remains fully under the toppings.

Making Either Type of Pizza at Home 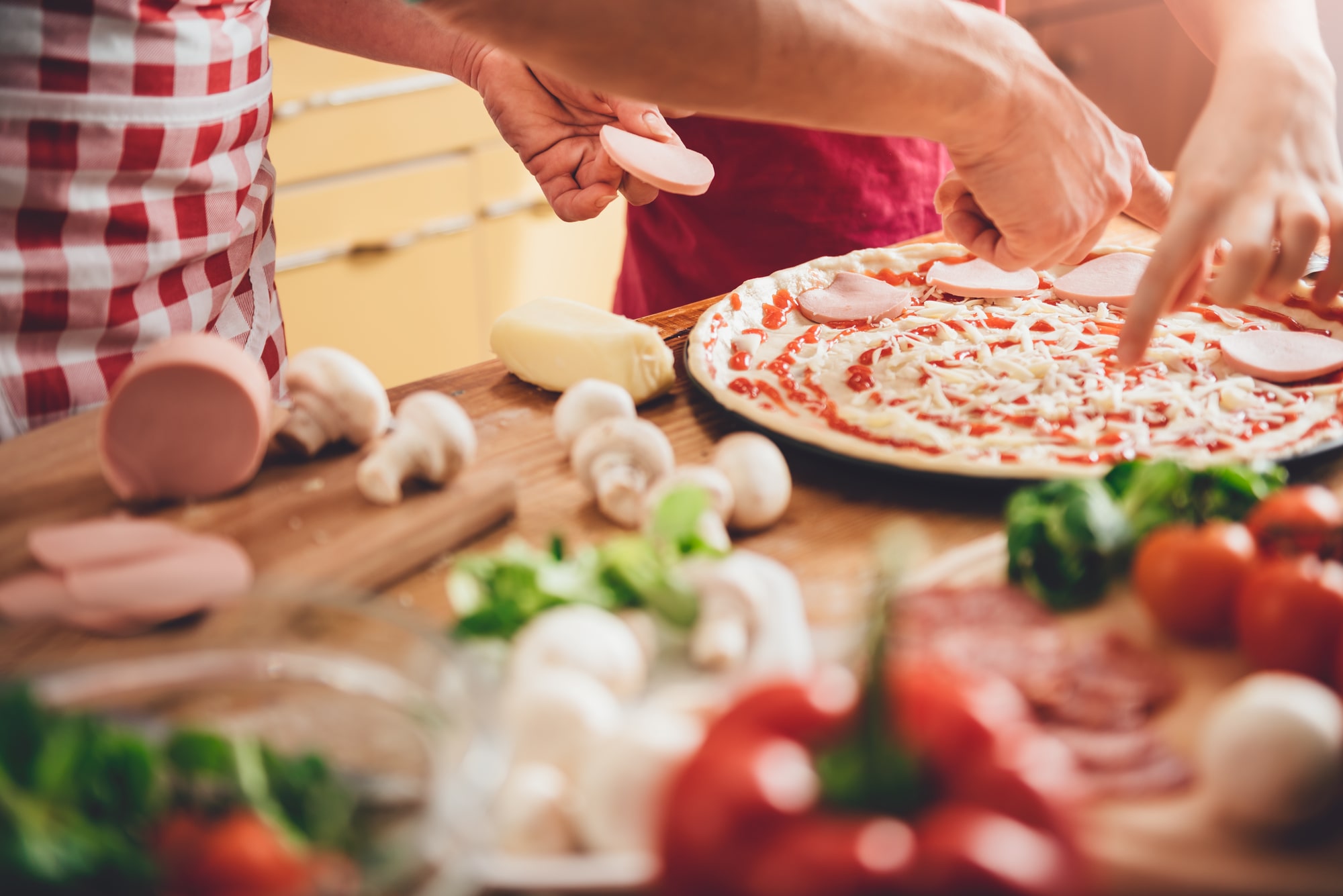 Pizza provides one of the world’s most perfect foods because you decide how carb-intensive you make it. You can slice a large portobello mushroom top length-wise and use it in place of a pita to make a pizza for one.

If you’re in a hurry, you can slap some tomato or pesto sauce on top of the flatbread, top it with whatever you like, and use cheese only if desired. Alfredo sauce also works as an option. If you don’t have pizza sauce or tomato paste handy, you can substitute pasta sauce.

Pasta sauce won’t have quite the right thickness without a little help, so add a couple of teaspoons of flour to it while heating it on a medium burner in a frying or sauté pan. Flour thickens the sauce and won’t affect the taste.

If you make the dough, you can make a quick dough that works best for Sicilian or Neapolitan styles without yeast. You’ll need a biscuit dough mix or basic kitchen ingredients. Once you’ve created your dough, you can top this quick pizza dough any way you like!

See also  Can You Make Pizza with Self-Rising Flour?

Similarities of the Various Pizza Styles 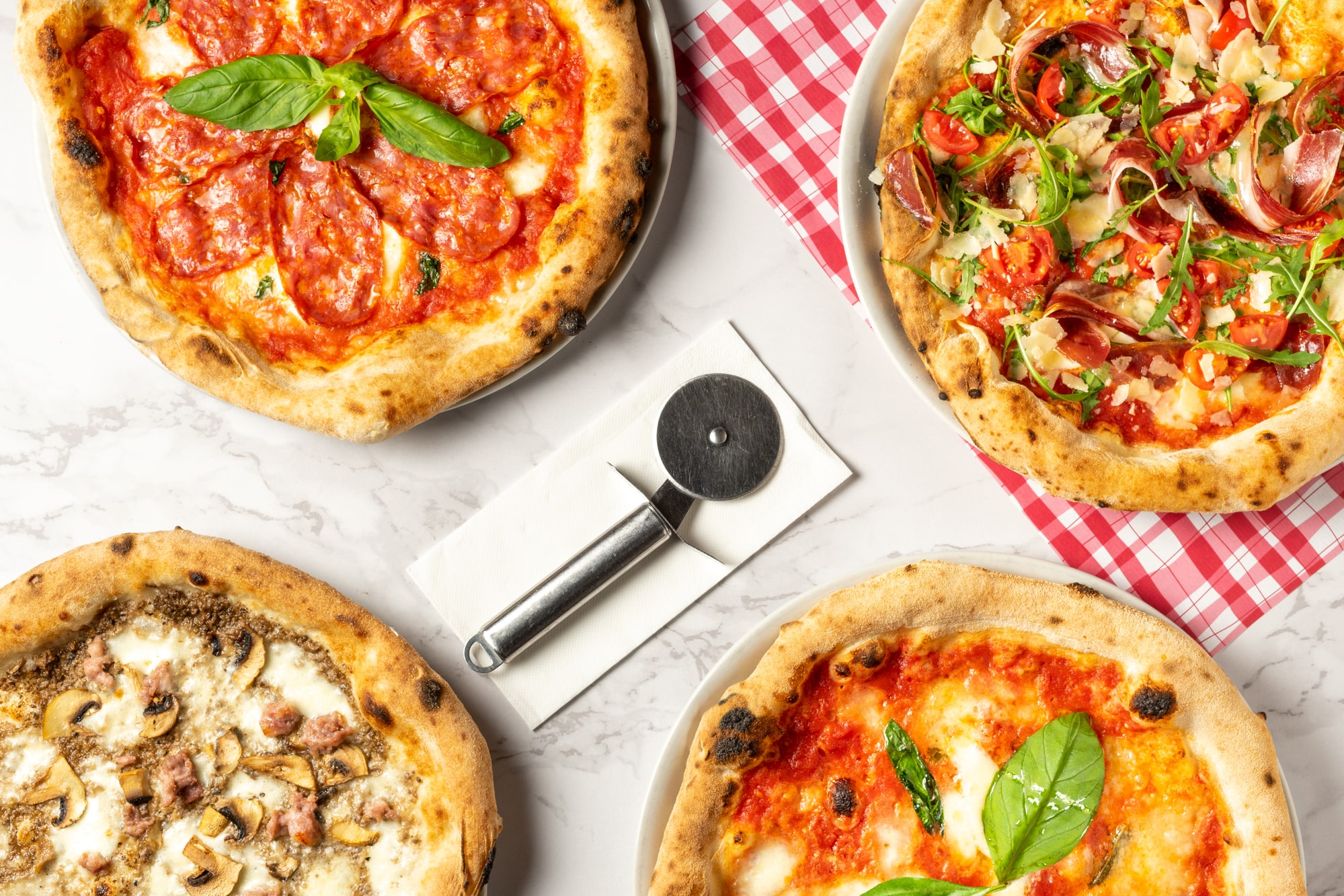 All pizza uses a sauce as its middle layer, topping its foundational layer of crust or vegetable. On top of the sauce, you pile your toppings, including cheese. Common toppings include:

You can find a list of uncommon toppings, too, if you want some unique ideas. One popular pizza available in both Italy and the USA, quattro formaggi, consists of four different kinds of cheese on top of marinara sauce.

You can make an artisan pizza with either a traditional/regular crust or flatbread crust. Artisan pizza merely means artistic, handmade, homemade, and typically gourmet. You might find unique ingredients on these pizzas, such as pine nuts, arugula, or asparagus.

You can make your own Italian flatbread at home, too. If you want to do this to make pizza, we suggest you bake a pan of focaccia or a batch of piadine. These two options make the best alternatives for homemade flatbread pizzas. You have 20 other Italian bread types, too, but most prove unsuitable for making pizza.