Over the years, pizza ovens have become a veritable triumph of science that has created a fast lane between the molten, gooey, crunch, and delicious pizza and your mouth.

With many folks as pizza fanatics, the at-home pizza oven, especially outdoors, has entered the household in mass quantities. For those who love making creative pizza concoctions at home, a standard kitchen oven just won’t do the trick.

Best of all, home pizza ovens have become incredibly versatile, allowing the user to make the perfect pepperoni pizza in large batches for kids’ birthday parties or as small as a personal pan pizza. While pizza ovens are made from a variety of materials, two of the best are perlite and vermiculite.

Before you hit the buy button on Amazon, it’s important to understand more about these two materials and which is best to meet your needs. Keep reading to learn more!

Table of Contents show
What is a Perlite?
What is a Vermiculite?
How are They Different?
Features
Materials
Durability
Cost
Benefits
Brief History

What is a Perlite? 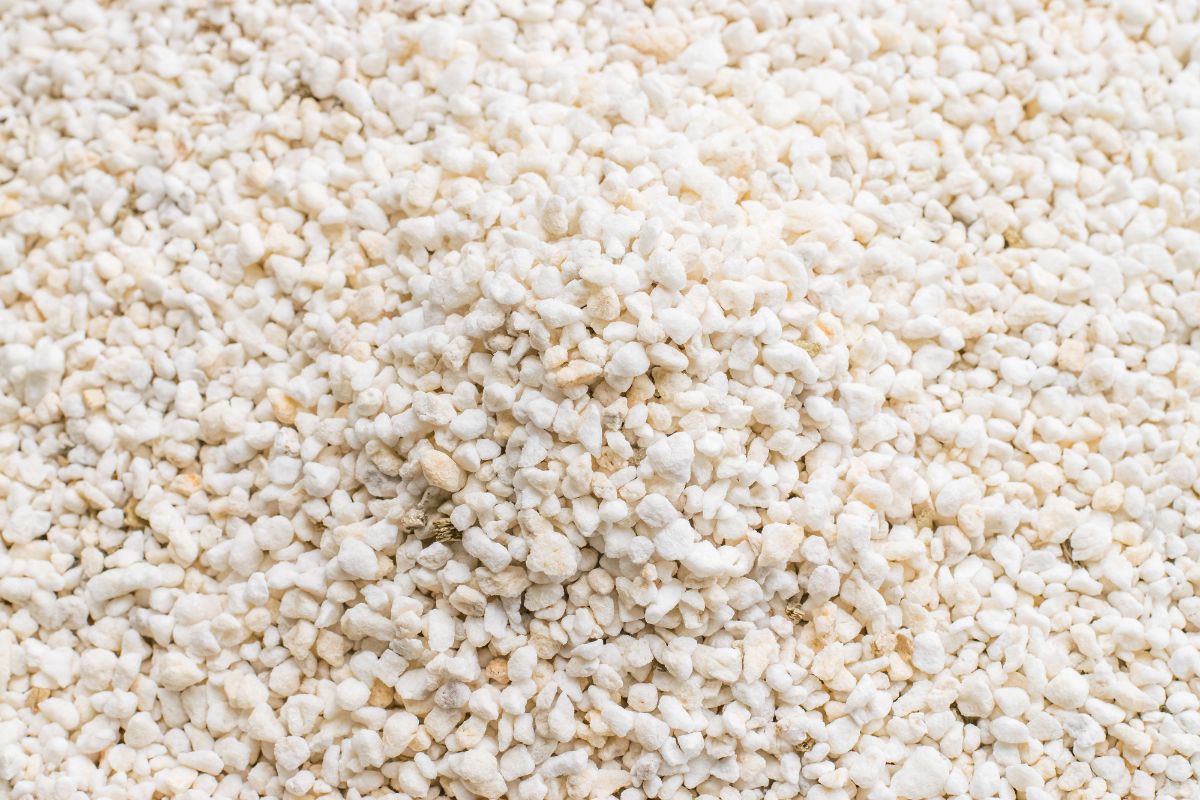 Perlite is the generic term for siliceous volcanic rock, which is a natural material. Perlite is not trademarked and is usually categorized with vermiculite, another natural mineral with similar physical characteristics.

The perlite that’s commercially used is expanded perlite, whereby the rock is crushed and heated to incredibly elevated temperatures until it forms a small oval that resembles puffed rice. The result is a pea-sized particle that comprises the mineral and air bubbles.

What is a Vermiculite? 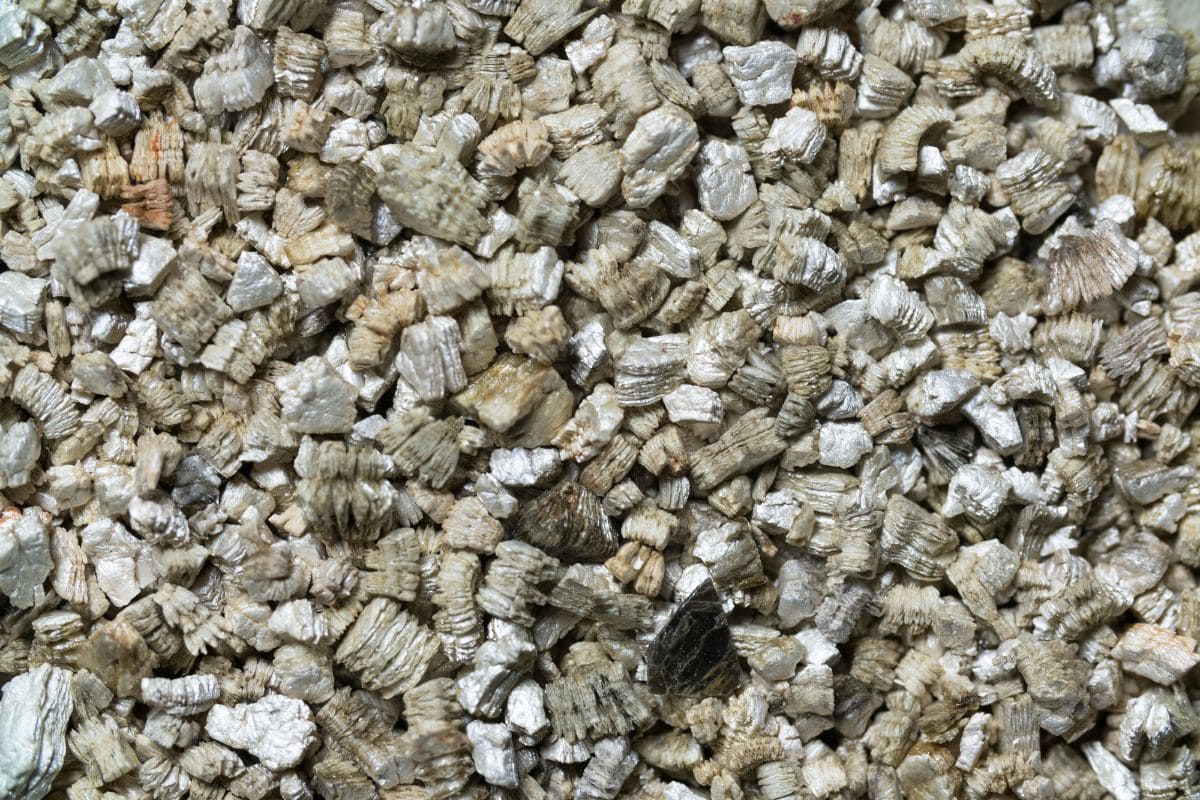 Vermiculite is a hydrous phyllosilicate mineral that greatly expands when heated sufficiently, like perlite. One of the main differences is vermiculite forms glossy flakes that vary in color from sandy brown to dark gray.

The resulting shape is like an accordion with a layered rock appearance that looks like mica. The exfoliated vermiculite is used in soil, molded shapes like fireplaces, refractory insulation, acoustic panels, and the fireproofing of pipes and structural steel.

How are They Different?

Perlite and vermiculite boast incredibly similar characteristics, with one key difference. Keep reading to find out! 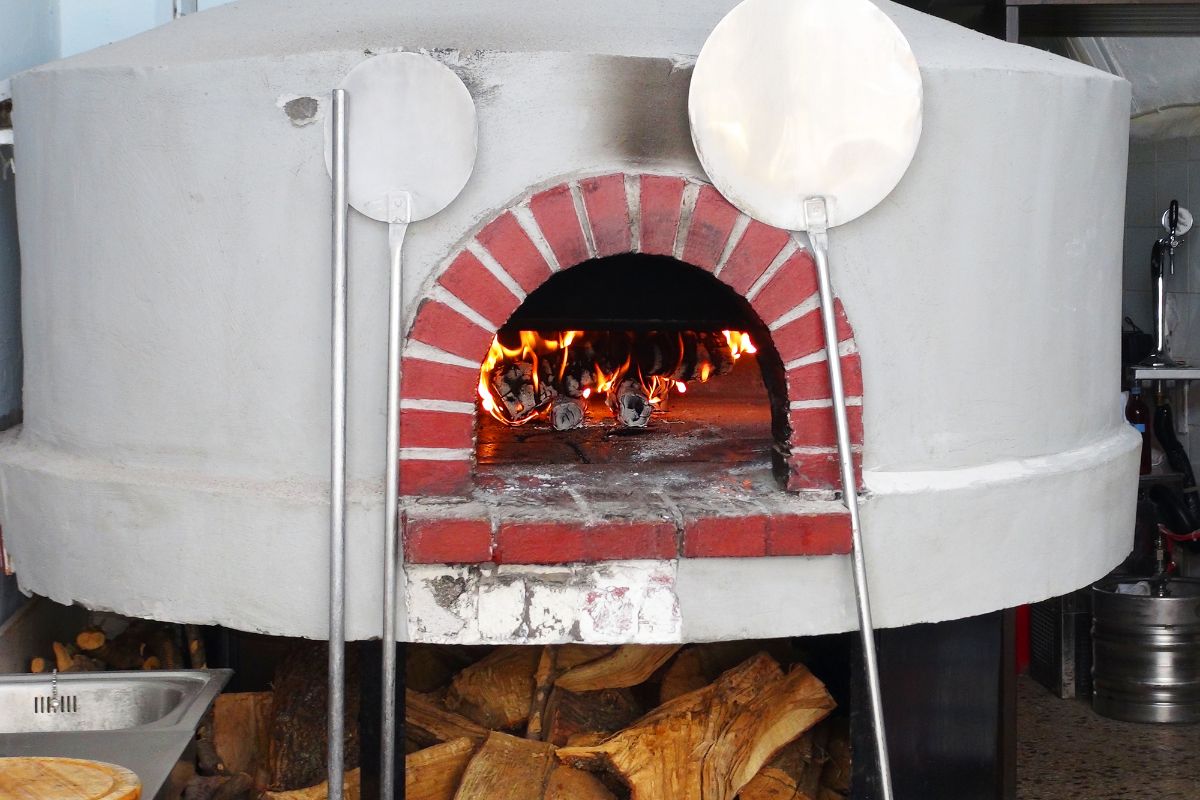 Perlite is a typical insulating material with a low thermal conductivity, which means heat transfer is low. Also, this material is lightweight, pH neutral, and rot and vermin proof.

Additionally, Perlite is a sustainable material because there is no waste or by-products. Like perlite, vermiculite is a neutral clay with a low pH, is lightweight, and retains water well.

Also, the material has a permanent negative charge and can provide energy savings when used for insulation. Additional features include non-combustible, highlight absorbent, non-reactive, and inert.

Perlite is typically combined with cement and water to create lightweight insulating concrete, which is ideal for pizza ovens. Like perlite, vermiculite is mixed with cement for a lightweight, low thermal conductive, and insulated pizza oven base. 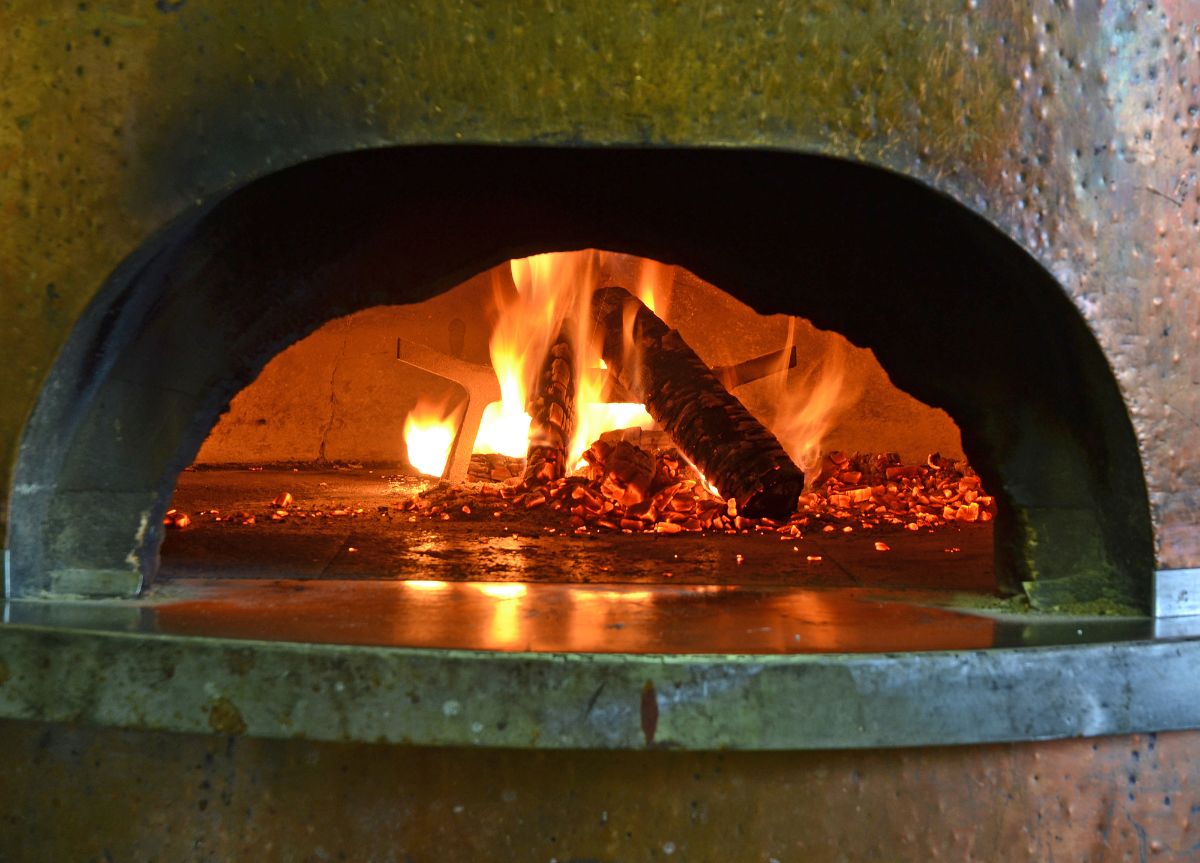 In general, perlite is much less expensive than vermiculite with four cubic feet of perlite costing around $8 and the same amount of vermiculite costing $27. One of the primary reasons for this cost difference is that vermiculite is a little better at absorbing water than perlite.

See also  Should You Preheat the Oven for Pizza?

Also, in the United States, only a handful of vermiculite mines exist, so the supply chain of the mineral has a significant impact on pricing. 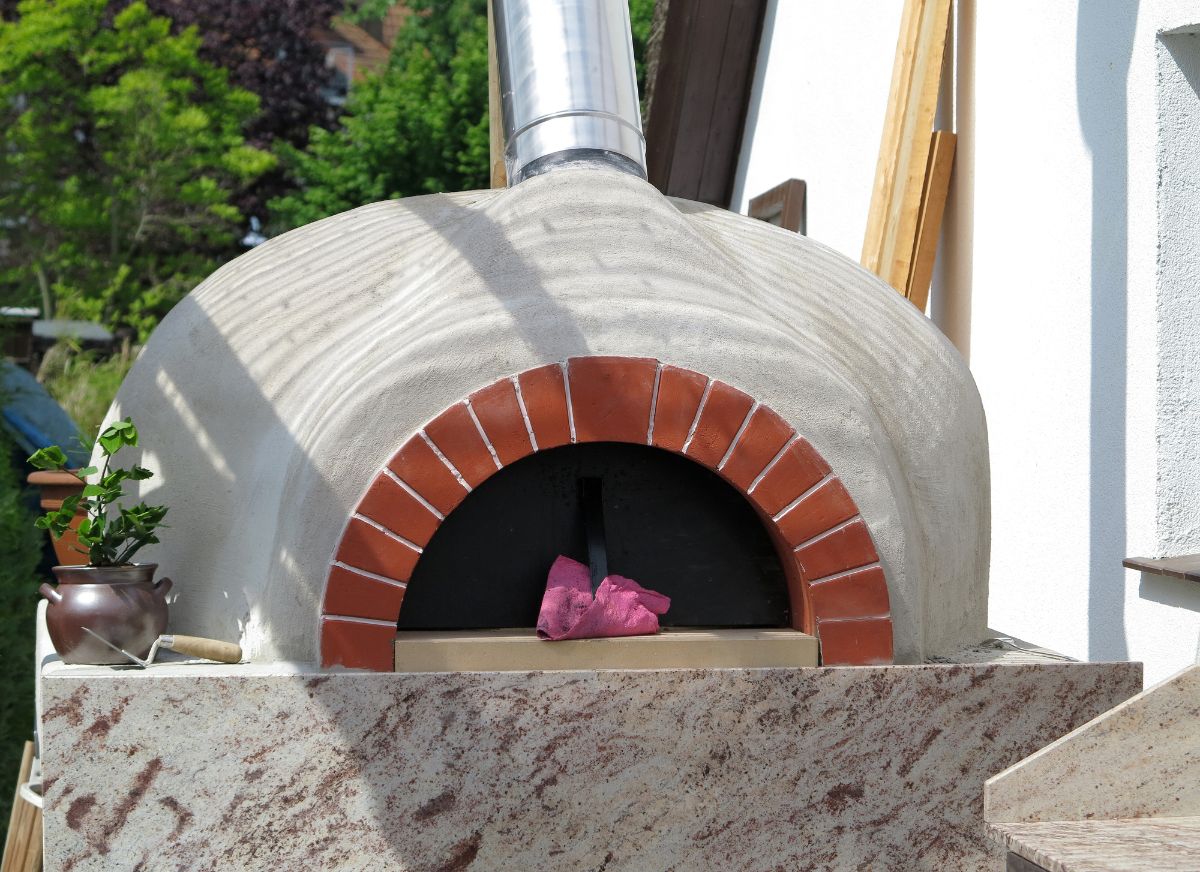 Most pizza ovens are wrapped in high heat fiber blankets that provide insulation by reflecting the heat into the wrap. The initial insulation layer keeps heat inside, but some migration will occur since heat will transfer through other components.

Therefore, loose-fill perlite offers additional insulation when poured over the blanket to fill gaps and efficiently keep the heat trapped inside. Also, burying the blank in perlite allows water to be retained.

Since this material is utilized in potting soils and agriculture, because of the ability to hold water, the last situation you want to occur is water contacting the pizza dome or floor. Masonry is always porous, so water intrusion could occur.

If this happens, perlite will be the first to absorb water migration, so it doesn’t reach other components. Vermiculite offers similar benefits as perlite, including the ability to retain water and heat, and is an excellent insulation choice.

Also, both materials are an excellent alternative to expensive refractory bricks that commonly line the base of a pizza oven.

While various names for perlite have been used to describe the mineral, in 1822, the product was finally given its current name. By the 1930s Americans started finding uses for the material.

In 1938, experiences were performed in Superior, Arizona by L. Lee Boyer, a scientist who submitted a patent application for a process to expand and convert perlite into a refractory or insulating material.

See also  What Wood Should Use in a Pizza Oven?

World War II stopped its development, which progressed in the early 1950s in the U.S. and the Netherlands. These advances have helped turn perlite into the modern insulating material seen today.

Founded in 1824 in Millbury, Massachusetts by Thomas H. Webb, under experimentation, vermiculite was discovered to exfoliate when heated. The mineral is formed by the alternation of biotite, and it is found as large pseudomorphs and small soil particles.

Vermiculite can also be formed between basic rocks and acidic intrusive rocks. From this point until the early 1900s, vermiculite was regarded as a scientific curiosity. In 1915, the first commercial mining effort for the mineral was set up, which failed.

The Zonolite Company set up another mine in 1923, which was successful and operated until 1990. They were the primary commercial supplier for decades. These two materials have incredibly comparable properties, making them both excellent options for insulating home and commercial pizza ovens.

While vermiculite tends to hold absorb water better than perlite, which is important for pizza ovens, it’s also significantly more expensive. Therefore, unless you’re setting up a massive commercial pizza oven, purchasing the less expensive perlite with slightly lower water absorption rates is your best bet for home use.