There are many different types of flour used for making pizza. Different flours will produce different results, so it’s important to know the differences.

If you’ve been making pizza dough with whatever flour you have on hand, it’s time to up your game. A great pizza starts with a great dough. 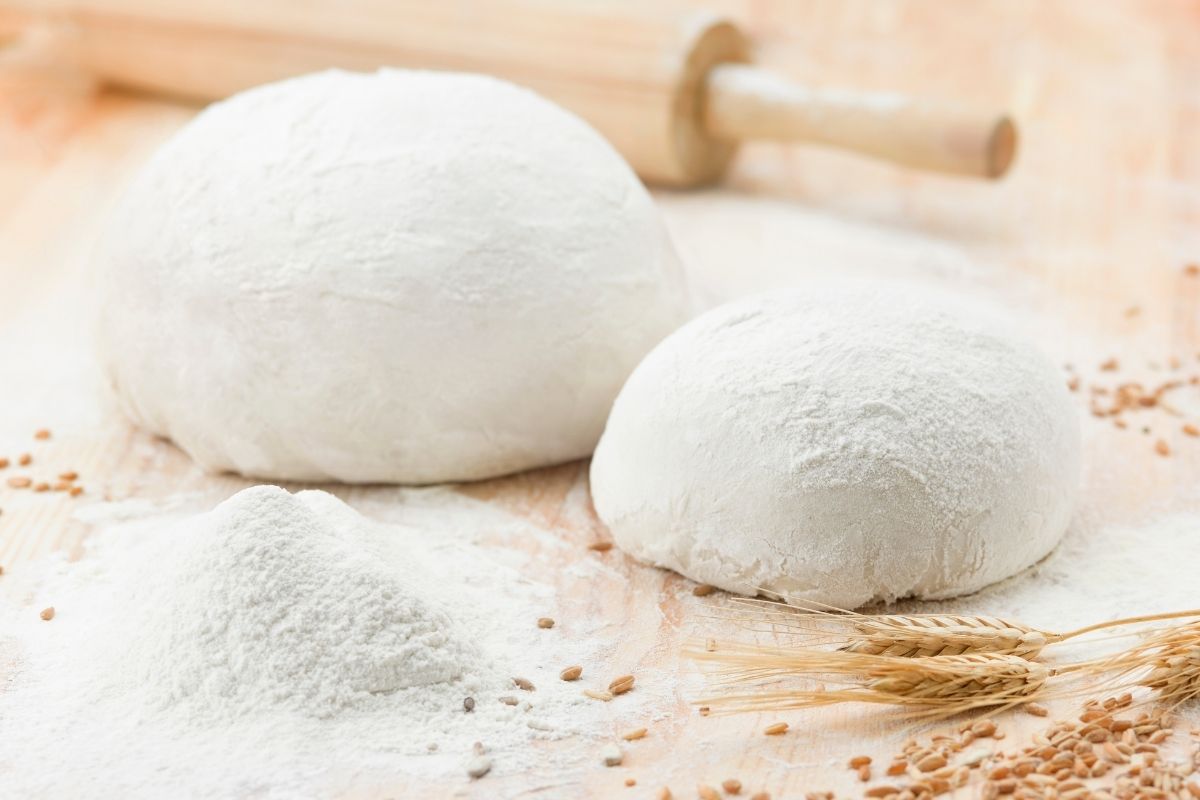 Italian flour is considered the gold standard for pizza making. It uses a different scale than American flour. There are a few different classifications, but the most used method refers to how finely the flour is ground. These flours range from 00 to 2.

In addition, there are two types of flour used in Italy. The first, and most common, is grano tenero. The other is grano duro, known as durum wheat in English. It’s also known as semolina flour. 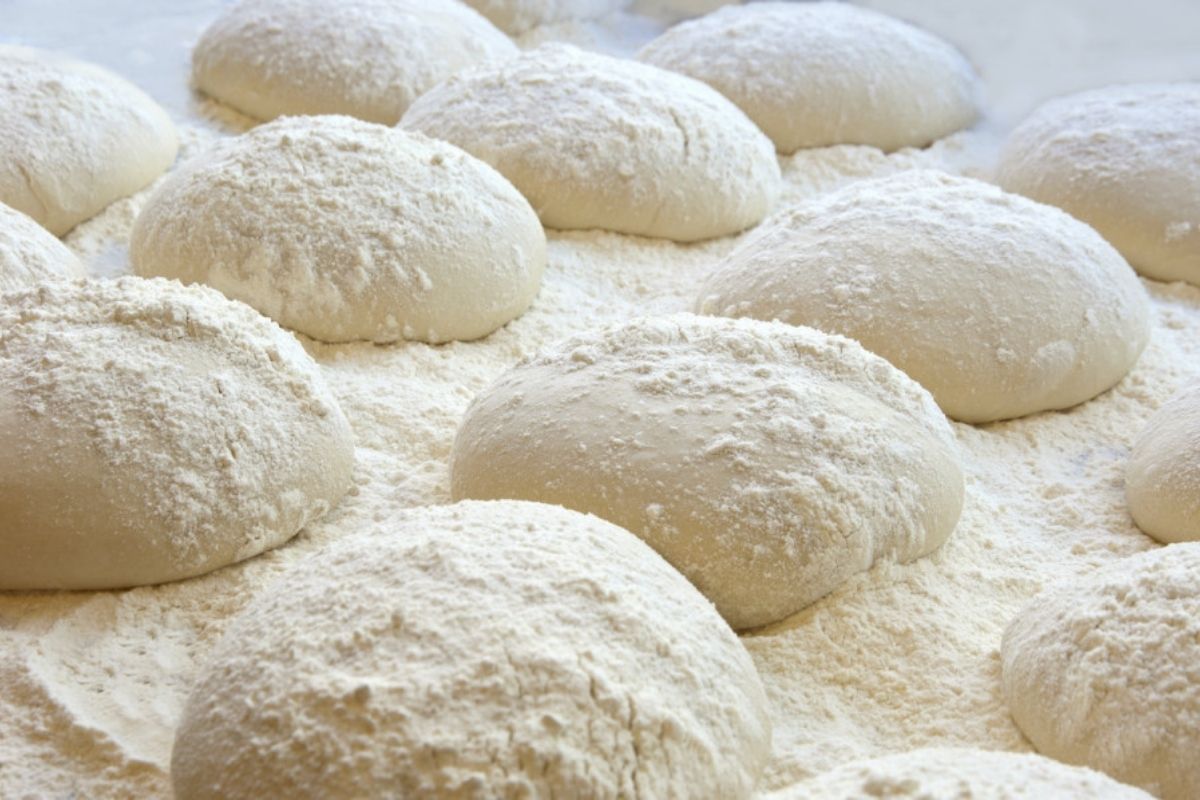 Tipo OO flour is the finest ground flour in Italy, and potentially around the world. It’s often considered the highest quality flour. This isn’t entirely true, because different flours are used for different purposes.

Tipo 00 flour is magnificent, but it is certainly not the best for every type of baking. It is bright white because it contains no wheat germ.

However, when it comes to making pizza, many cooks consider 00 flour to be the best. It typically has a 12% protein content.

Tipo 00 results will vary slightly based on the brand. Generally, this type of flour produces a traditional crust that is thin and airy, usually known as Neopolitan. 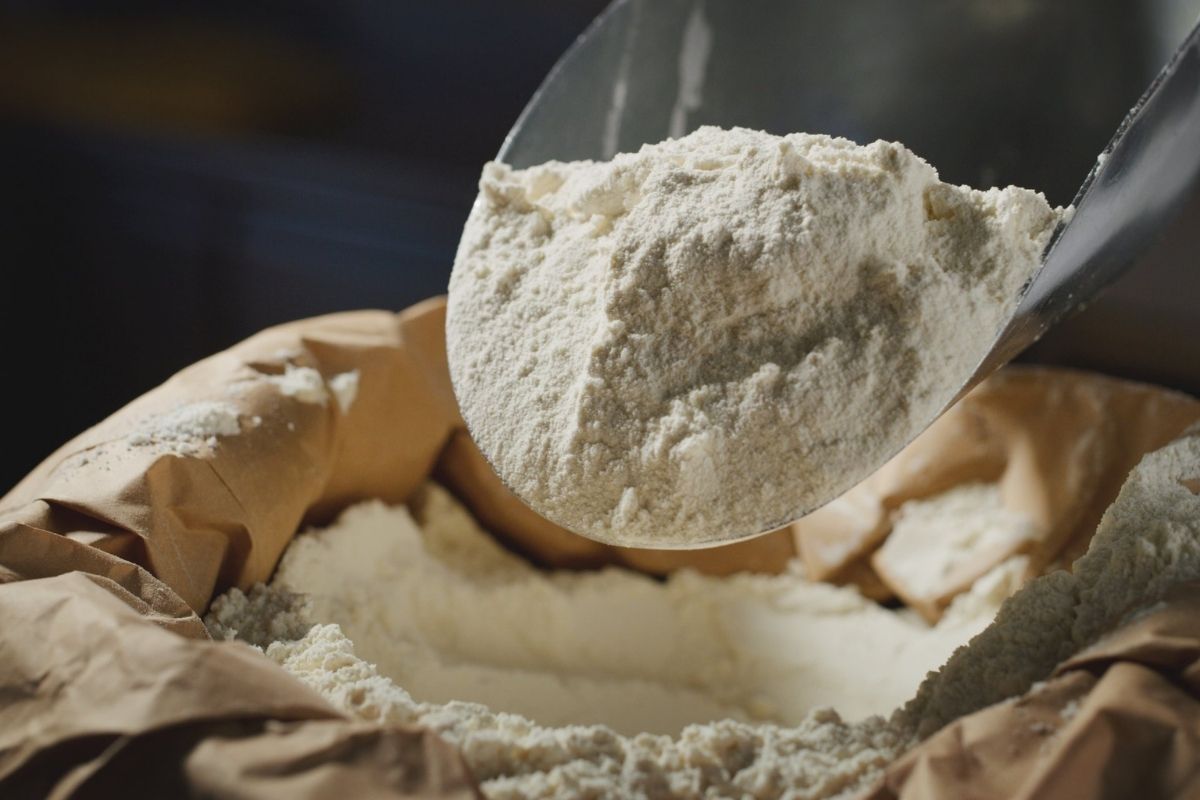 Next is Tipo 0 flour. This type is still white, but it contains a bit of wheat bran. It’s still a fine grind, but not as fine as 00 flour.

The crust will be similar to that of 00 flour. It will create a light thin crust. It works well for a Neapolitan crust. 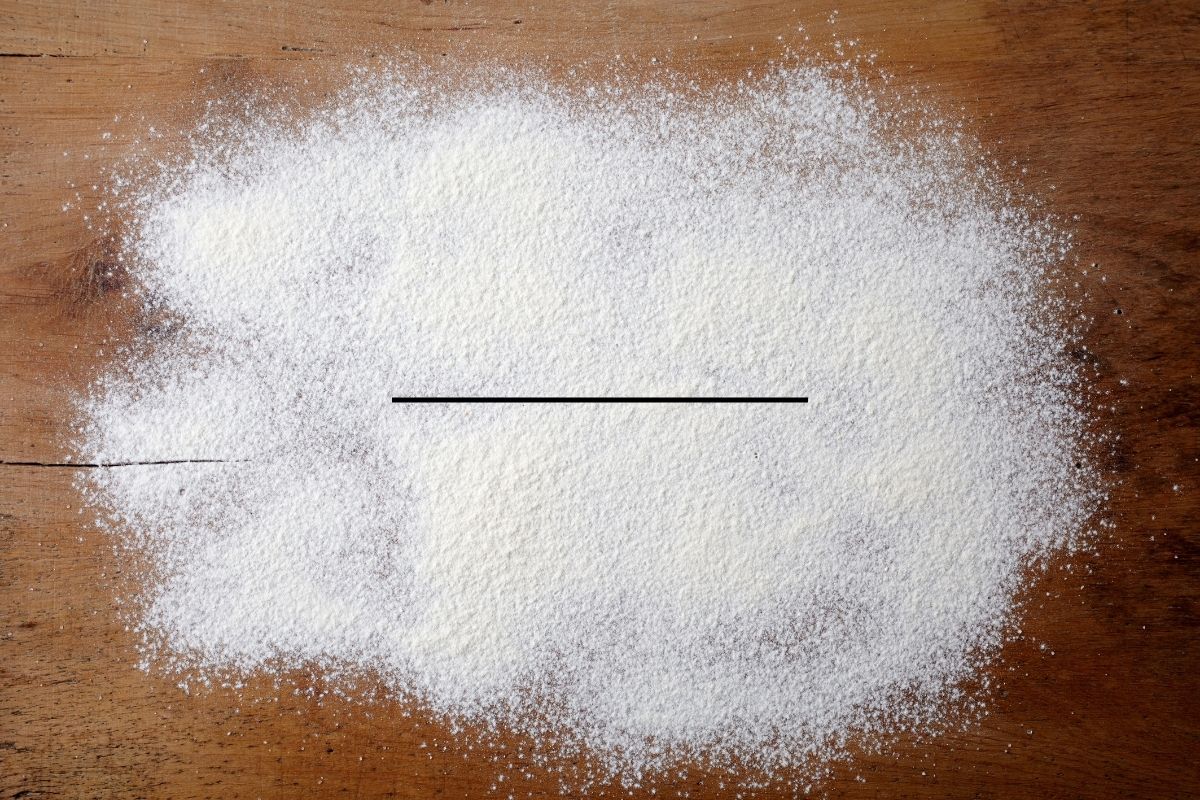 Type 1 flour is still white, but it has a significantly higher bran content than Type 0 flour. This provides a savory, nutty flavor. It also has a much higher vitamin, mineral, and fiber content than finer ground flour.

Of course, you probably aren’t choosing pizza flour based on its nutritional profile.

Like the types above, type 1 flour is used to make thin crust pizza. It is denser than the previous types, and provides a more savory flavor. However, it can also create a thicker crust pizza. 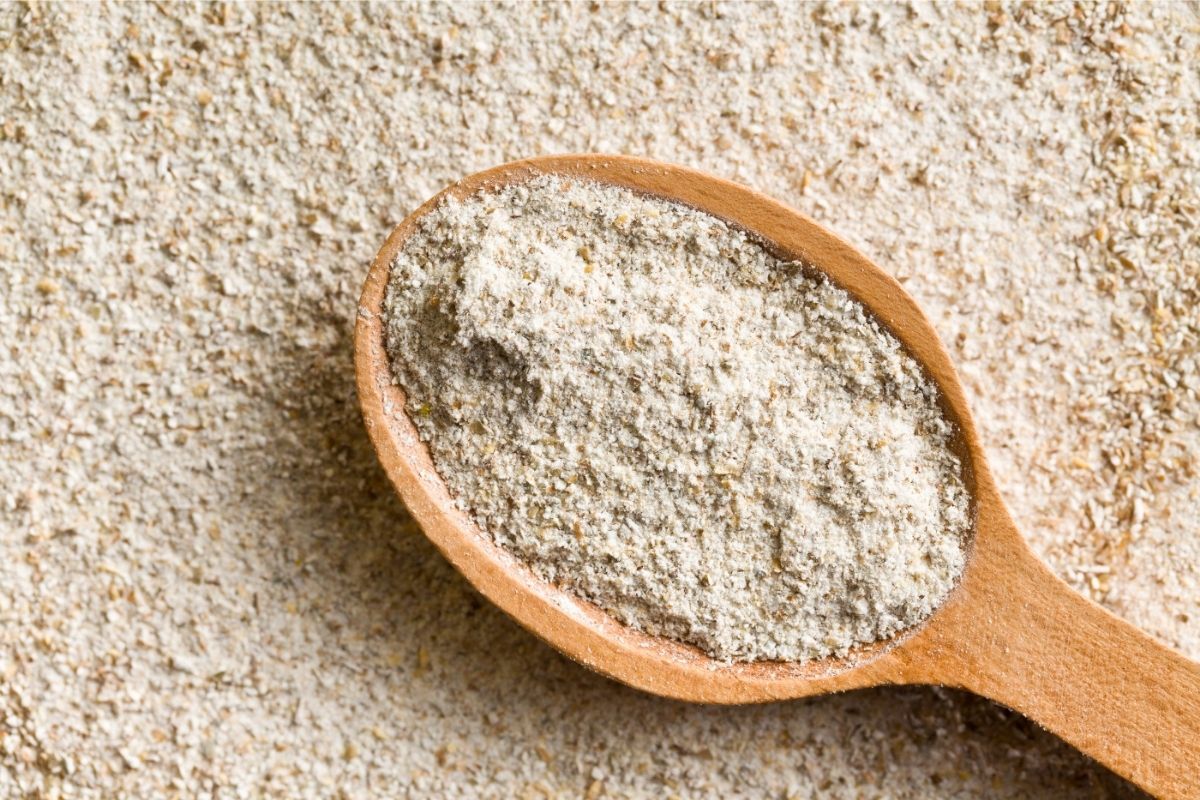 Type 2 flour has a coarser grind, and more bran than previous types. It’s still white, though it will appear slightly darker than the types above. It’s often called white whole wheat flour.

It provides an excellent nutritional profile. Most flours have a small range when it comes to gluten content, but this isn’t true for type 2.

The gluten content can range from 9% to 13%. You should consider this when choosing a particular brand of type 2 flour. The more gluten is in the flour, the chewier your finished crust will be.

Type 2 flour can create anything from a thin crust pizza to a deep dish. Its varying gluten levels play a role in its versatility. If you want a chewy crust, choose a high gluten variety. 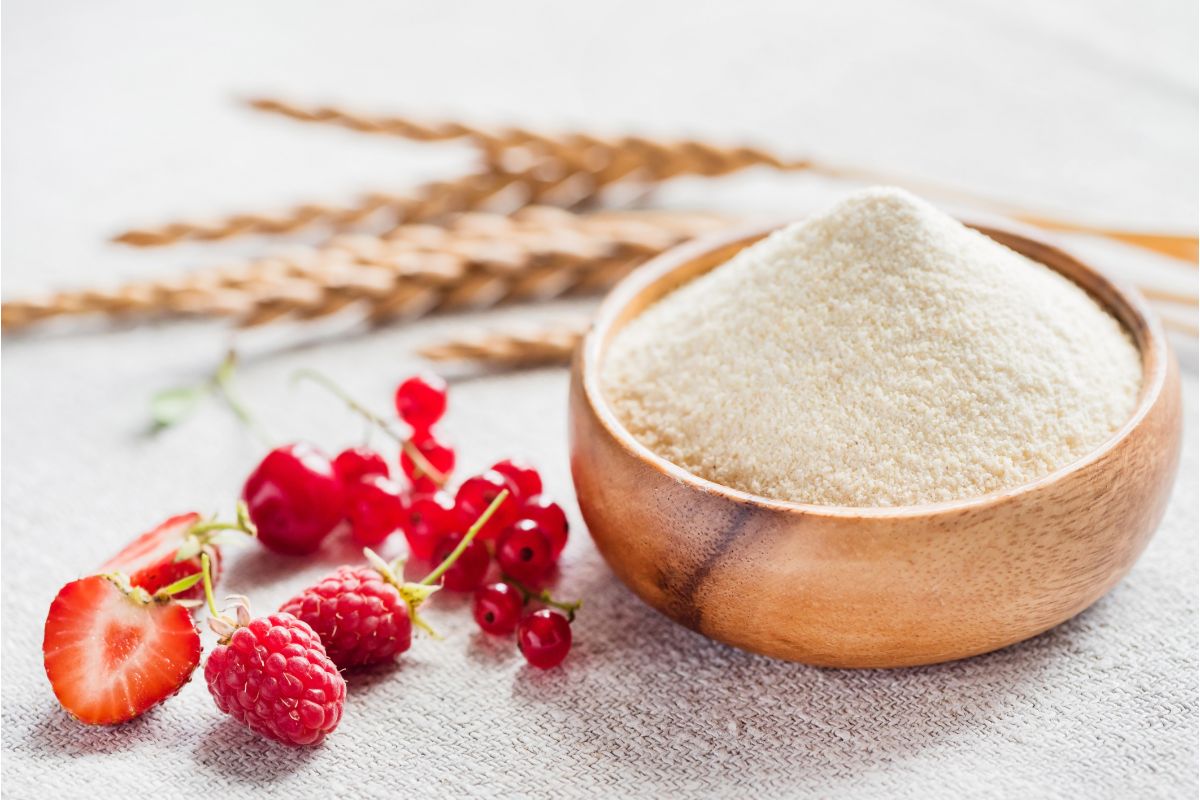 Semolina flour is made from durum wheat, instead of the soft wheat used in other types of Italian flour. This type of flour has a high gluten content, but the gluten acts differently.

It’s not as elastic as soft wheat gluten. This makes it great for pasta making. In fact, it’s often called macaroni or pasta flour.

When used as pizza flour, it creates a crispy bottom and chewy texture.

This type of flour creates a cross between a thin and thick crust. The bottom should be crispy, while the rest has a chewy texture. 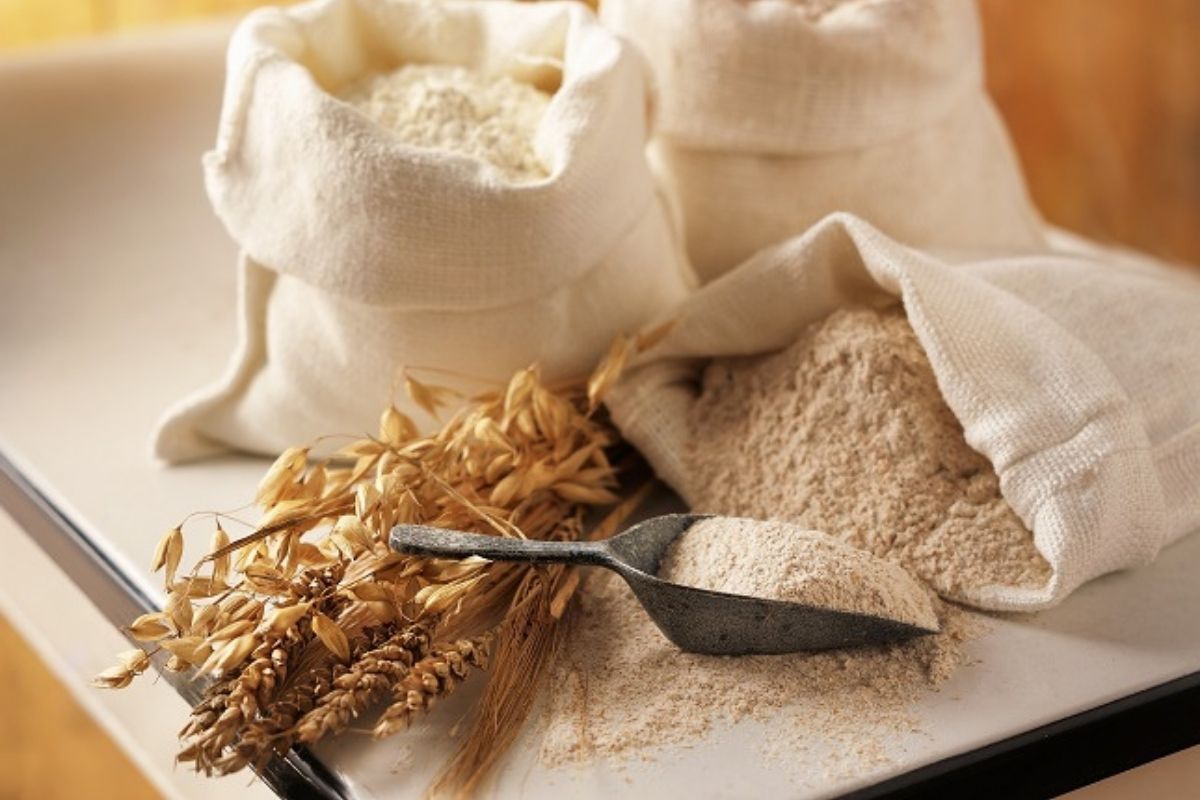 Manitoba flour creates a thick or deep dish-style crust thanks to its high gluten content. 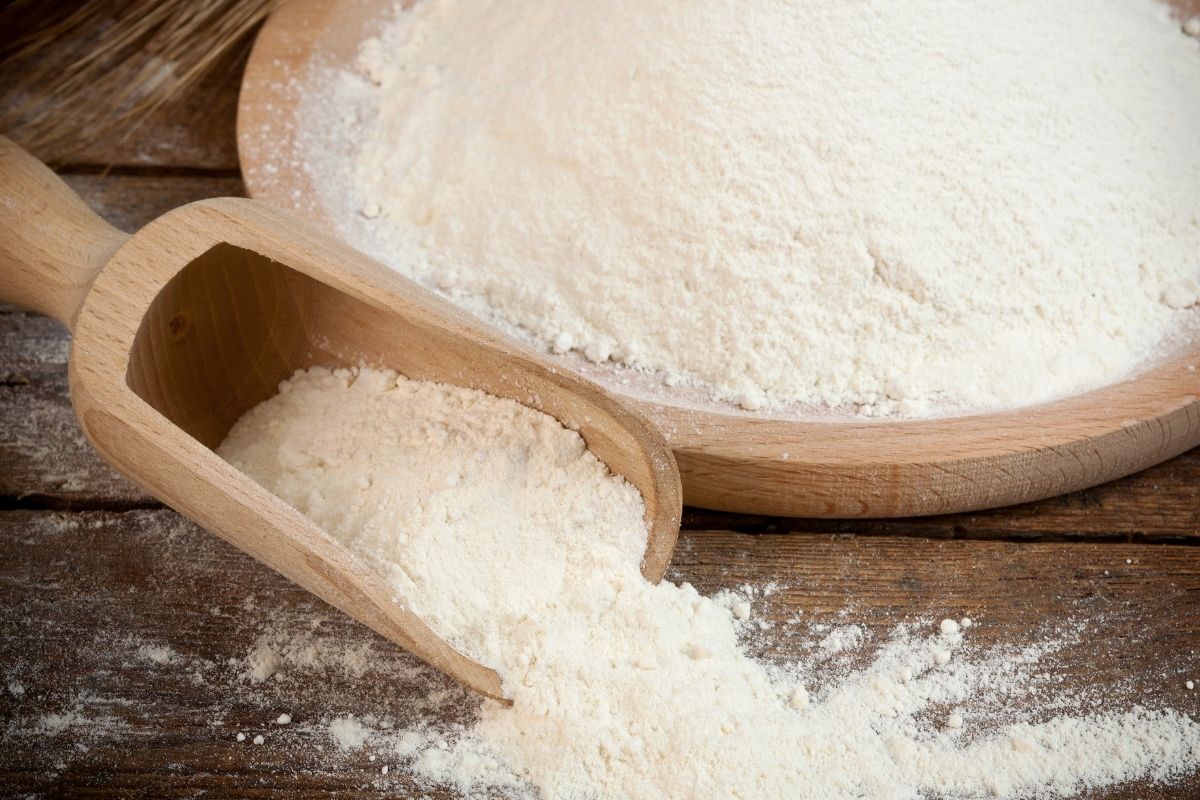 Italian flour may be the traditional type of flour used for pizza, but many Americans prefer to use American flour. It’s typically less expensive and easier to find than Italian flour.

Perhaps most importantly, it’s easier for us to understand. Italian flour requires you to understand their rating system and the names they use. You can probably already tell the difference between self-rising, all-purpose, and bread flour.

If you want to use American flour, don’t worry. You can still create a great pizza, as long as you choose the best flour for the crust you want. 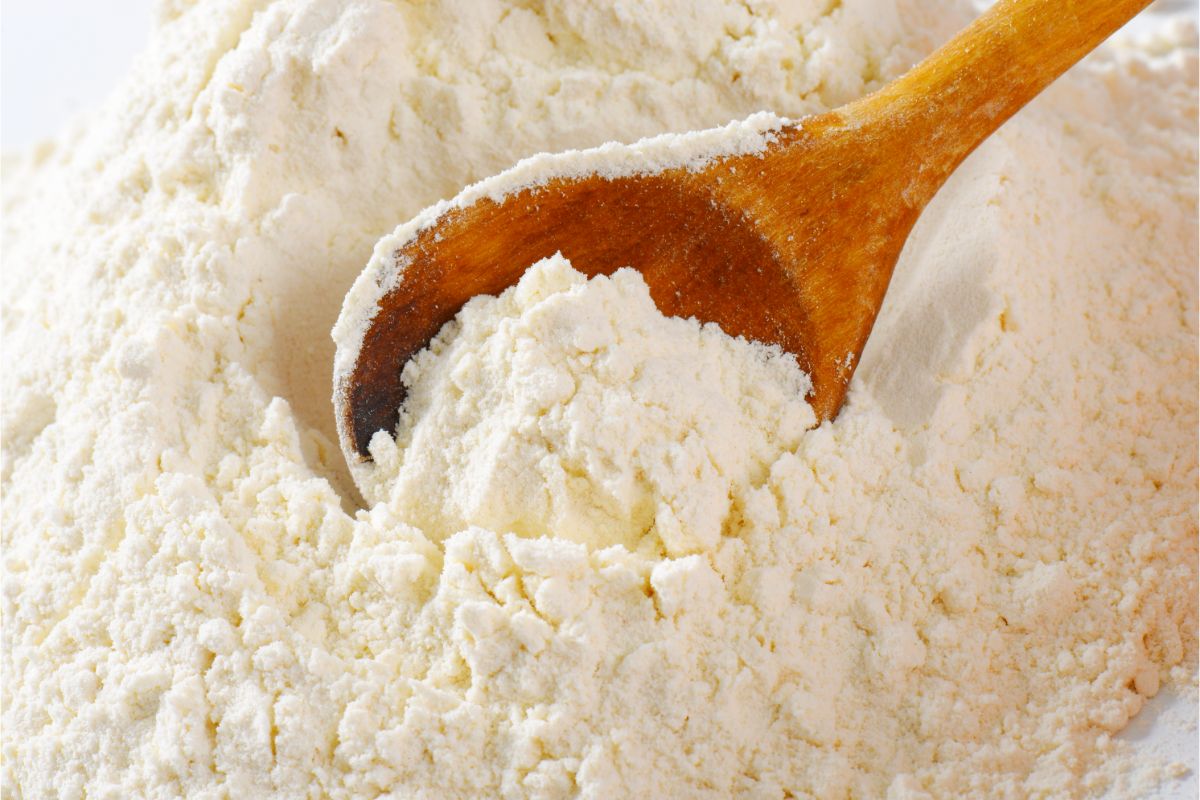 All-purpose flour is used for a wide range of baked goods. As the name suggests, it’s suitable for all, or nearly all, purposes. Think of all-purpose flour as the jack of all trades, and the master of none.

This means all-purpose flour will perform well, but not quite as good as specialized flour. If it’s all you have in your pantry, you can certainly make a good pizza with it.

It can be a bit difficult to work with because it can tear easily when working the dough.

Not surprisingly, all-purpose flour works for any type of pizza crust. These include thin crust, deep dish, neopolitan, and Cicilian style. 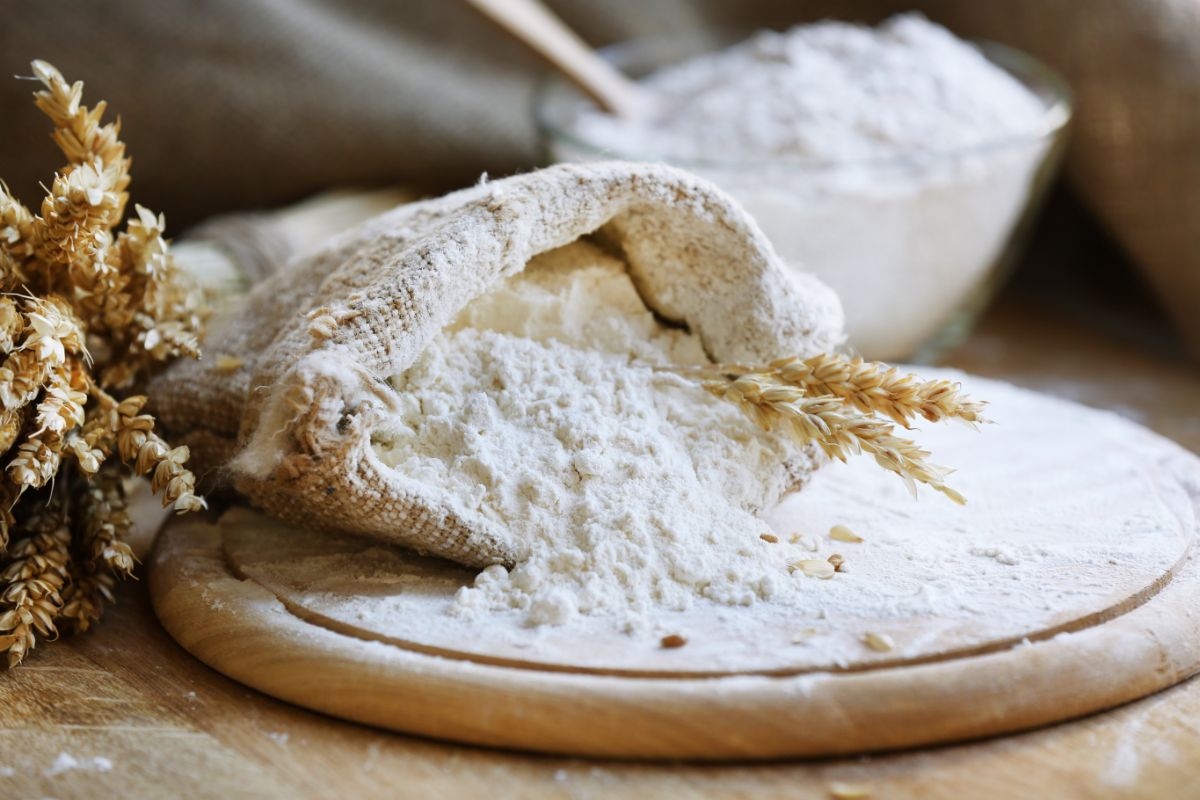 Bread flour is known for making excellent bread, but it also makes a great pizza crust. It creates a crispy bottom and a chewy inside, which makes it a good choice for deep dish and New York-style pizzas.

Compared to Italian 00 flour, bread flour provides more chew and stretch. It’s not quite as airy and delicate as the fine milled Italian flour, but many people enjoy this type of crust.

Bread flour dough will not tear when stretching as all-purpose flour does. However, it does present its own challenge. The higher gluten content that provides the stretch and chewiness can cause the dough to snap back.

You work it into the desired shape, only to find it quickly returning to its original form. The key to avoiding this is to give it plenty of time to rest before working the dough.

It’s great for deep-dish-style pizzas. It works well for a medium-thick crust, typically known as hand-tossed, as well. It’s also suitable for thin crust, although it won’t produce the light airy crispness of 00 flour. 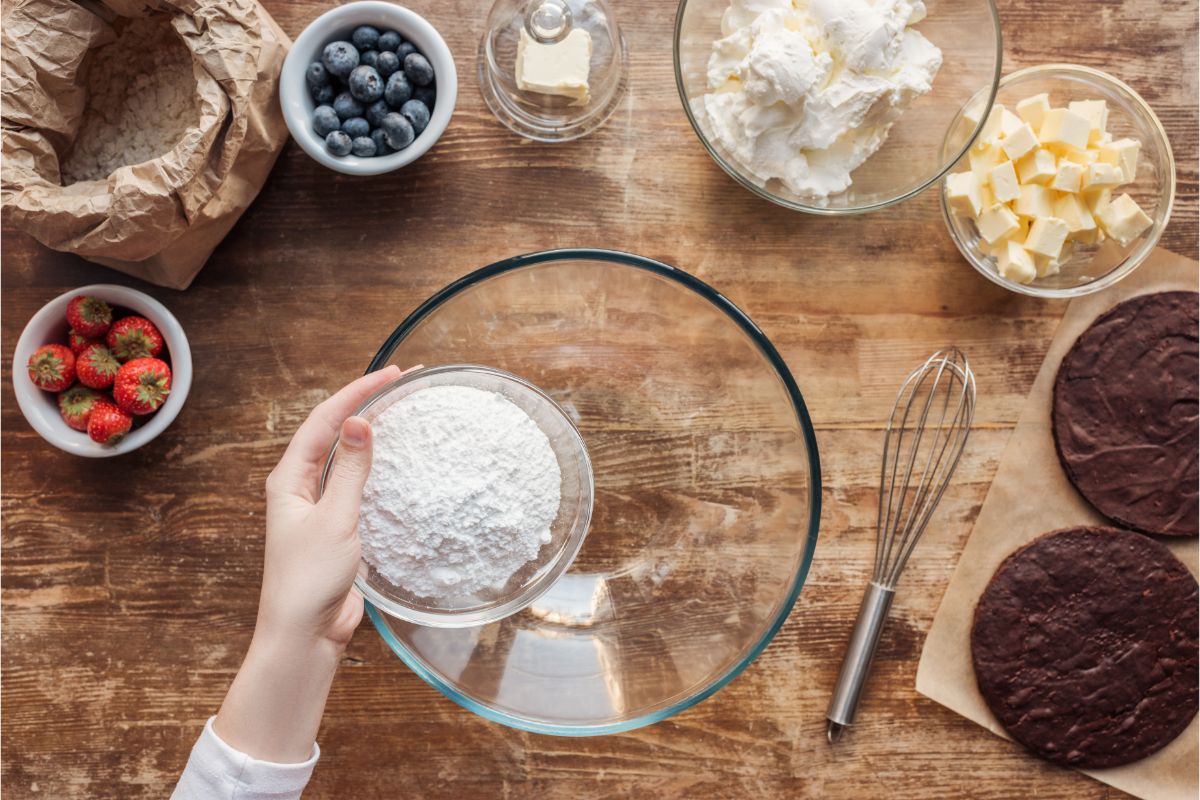 Cake flour has a low protein content and a delicate grind. That’s what allows it to make cakes that are light and airy, yet dense enough to hold their shape and texture.

In theory, this should also produce a light airy pizza crust. However, it doesn’t work that way in practice. The bubbles cake flour makes are too delicate for pizza.

Instead of being light, the bubbles collapse. This leads to a gummy texture that isn’t appealing. Just as you wouldn’t want to use bread flour to bake a cake, you don’t want to use cake flour to make a pizza.

It creates a gummy and unappealing crust. Instead of being light, it becomes dense. In fact, it’s more reminiscent of pasta than pizza. 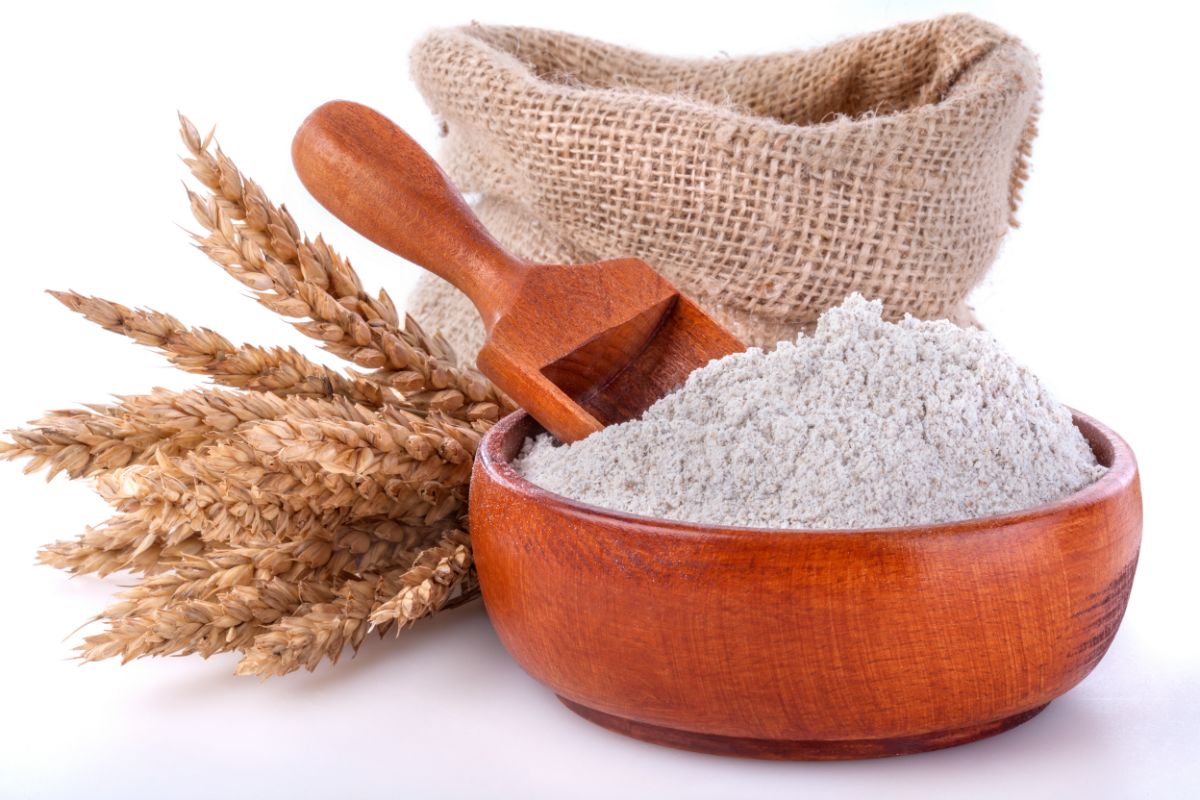 Whole wheat flour is popular in many recipes. It provides more nutrition than bleached flour because it contains all of the wheat grain. It’s also higher in protein or gluten.

Whole wheat has a nutty flavor that can make your pizza more savory. However, using it for pizza dough can be problematic. Due to its’ high gluten content, usually around 14%, the dough can become too chewy.

This doesn’t mean you have to skip your whole wheat crust entirely. It works well when combined with bread or all-purpose flour in a 1:1 ratio. You’ll get the taste and health of whole wheat, with the texture balanced by the other flour.

Whole wheat flour is typically used for medium to thick style crusts. These include hand-tossed and New York-style crusts.

There are other types of flour that don’t fit easily into the Italian or American flour categories. They are unique, but certainly worth giving a try. You may find your new pizza flour favorite below. 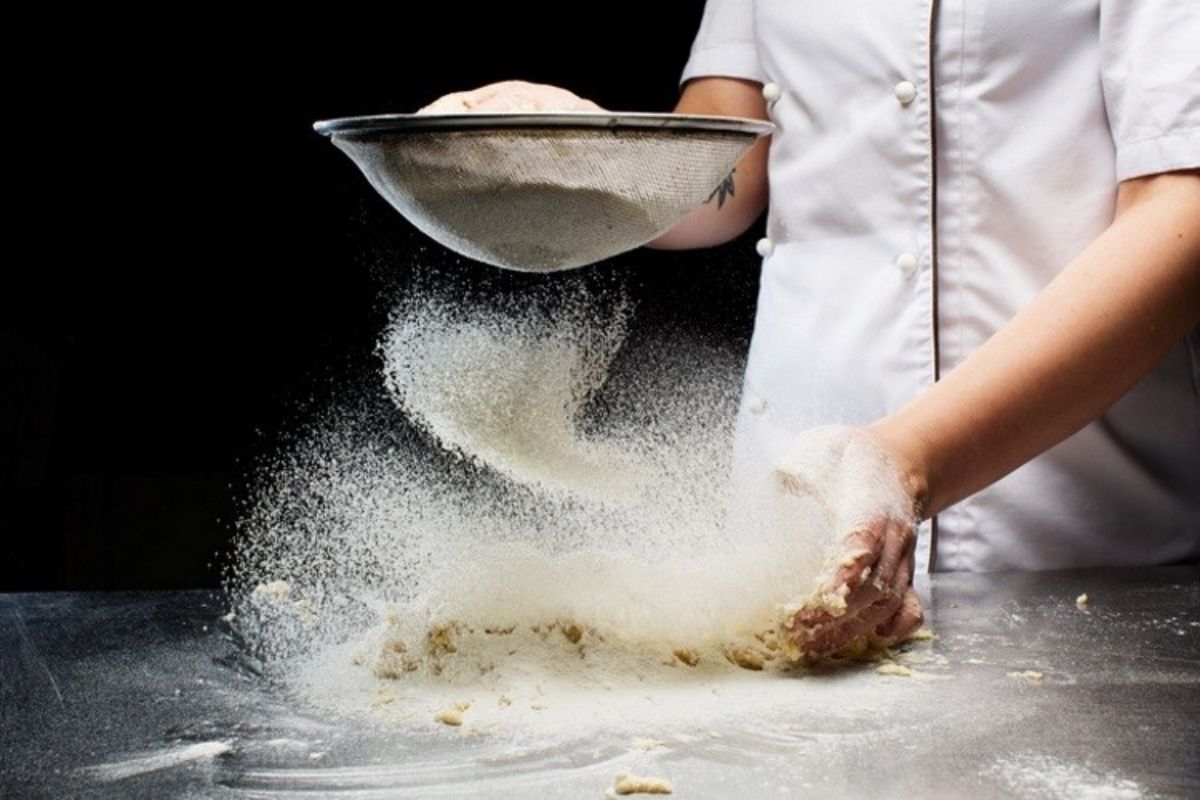 Bromated flour is bromated. If you don’t know what that means, no worries. Most people have never even heard of bromated flour before.

Bromated flour is created with potassium bromate. The bromate creates oxidation and results in a higher rise and elasticity.

It’s worth noting that bromated flour is banned in many parts of the world, including China, Australia, and Europe.

The International Agency for Research on Cancer lists the ingredient as a potential carcinogen, but it’s considered safe by the FDA. You’ll need to use your own judgment to decide if you are comfortable using bromated flour.

Unfortunately, many flours on the market today are bromated. If you want to avoid it, you’ll need to read the label carefully. Bromated flours are usually bleached as well.

Related: Do You Need to Sift Flour for Pizza Dough? 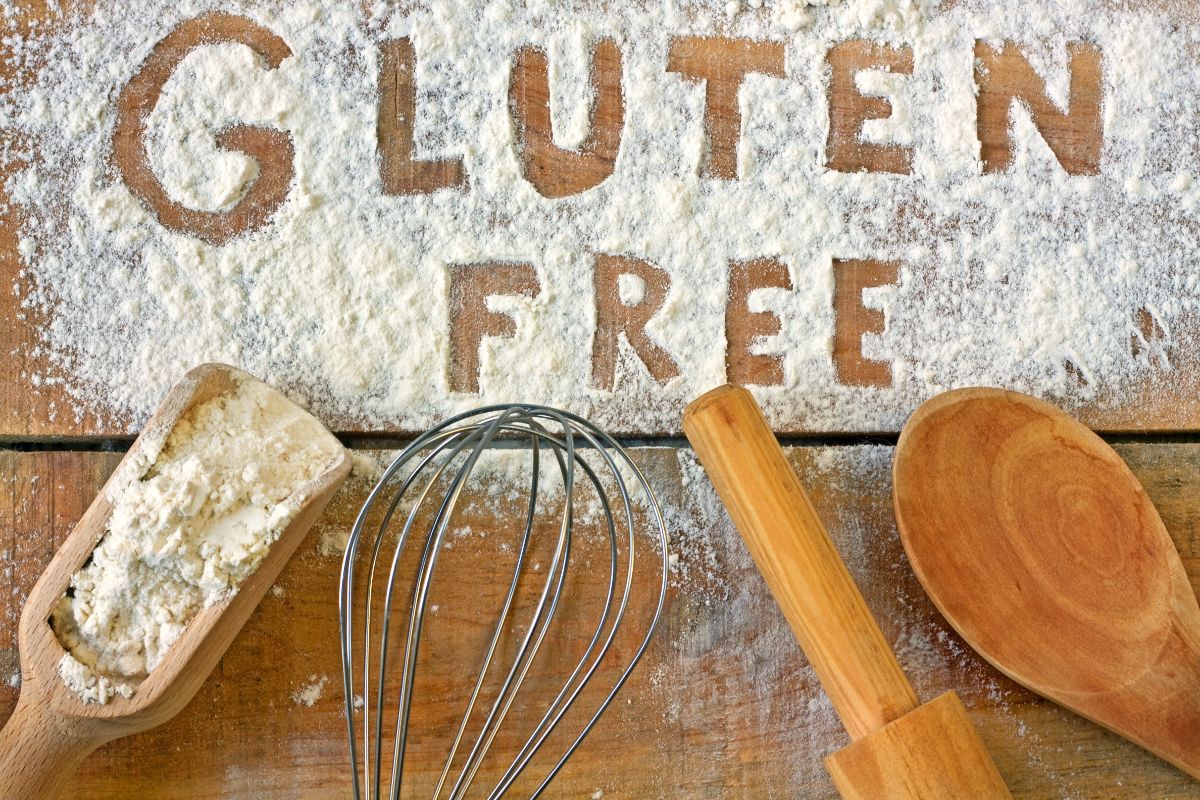 Gluten-free flour can be made with rice, whey, potato, or garbanzo beans. Some recipes call for a mix of different gluten-free flours to create the correct texture and taste.

Gluten-free flour will create a thin crust. However, additions like xanthan gum can improve rise, giving you a thick crust pizza. 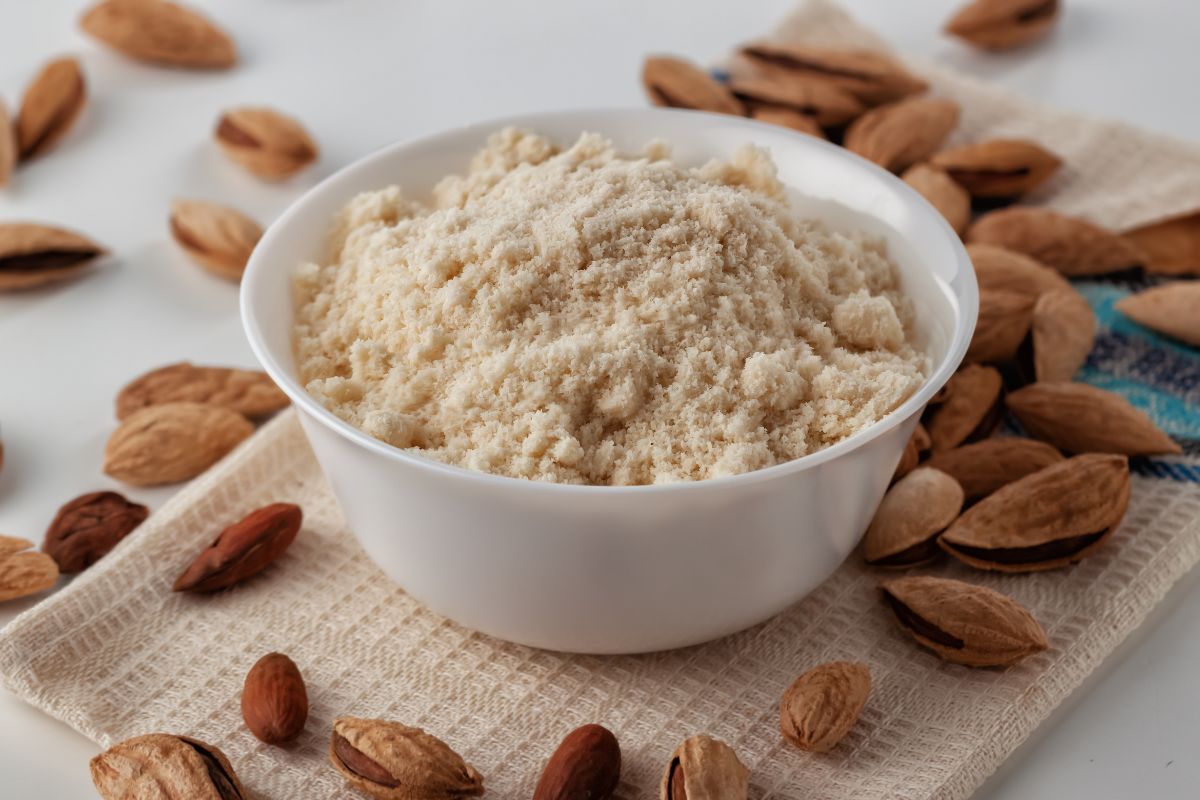 Almond flour is typically combined with mozzarella cheese to create “fathead” dough. This is a popular choice for those looking for a keto-friendly pizza, as well as those who are gluten-free.

As the name suggests, almond flour is made from almonds instead of wheat.

Most say that the flour creates a crust similar to a traditional pizza, and some even prefer the taste of almond flour.

It’s most commonly used for thin crust pizza, but it can be used for thick crust styles as well. 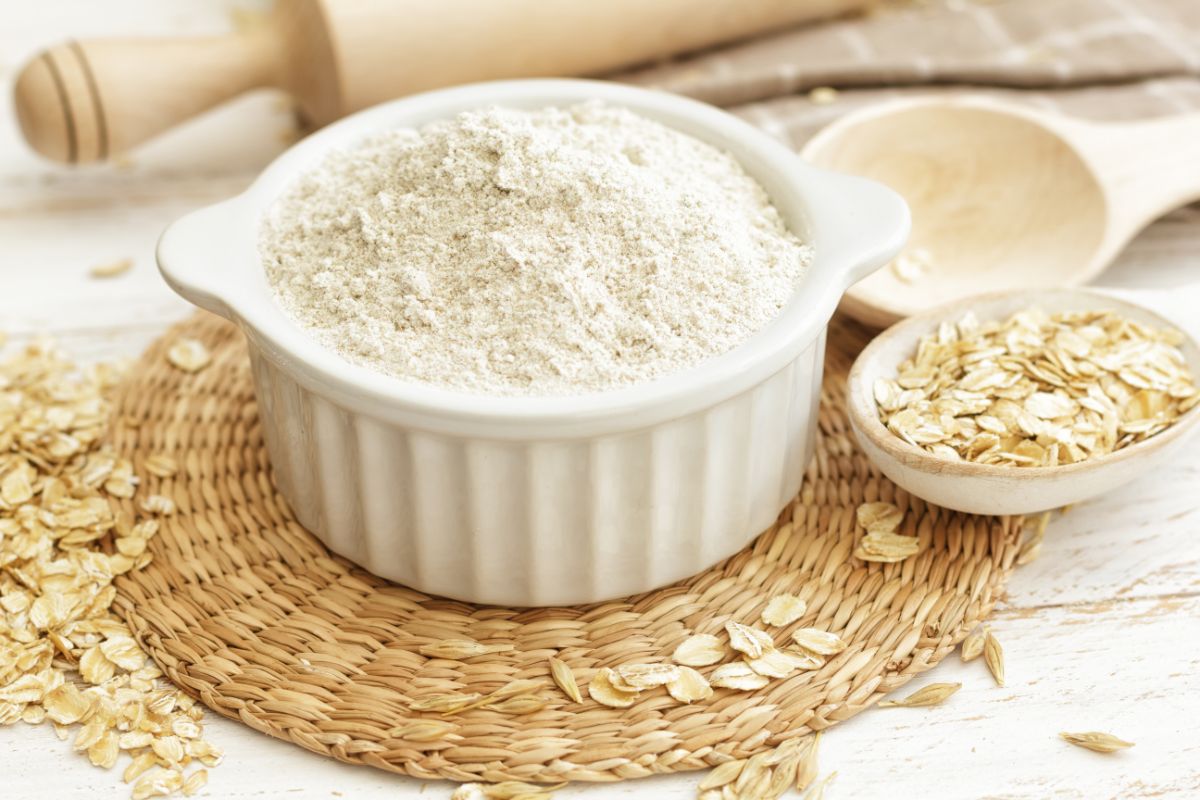 Oat flour is yet another gluten-free option that is considered a healthy alternative to white or all-purpose flour. Its nutrition doesn’t quite meet the standards set by whole wheat.

However, it provides a mild, nutty flavor, without the denseness that can come from whole wheat. It’s also much healthier than all-purpose flour.

Another benefit of oat flour is its minimal processing. Most store-bought oat flours are stone ground, which is a far cry from the machine milling that most flours undergo.

You can also make it at home. All you need is uncooked steel-cut oats, and a food processor to create your own oat flour.

Oat flour doesn’t rise well on its own. You can add baking powder or baking soda to provide some rise. However, you are unlikely to get a deep dish-style crust with oat flour. If you are looking for a thin crust, oat flour is a valid option.