Sausage is one of the most popular pizza toppings, but that doesn’t mean there’s only one option. Here are all the types of sausage you might find used to top our favorite savory pie!

Did you know that pizza is one of the United States’ favorite foods? It’s estimated that we eat 100 acres (yes, ACRES) of pizza in a single day, and that as much as 40 percent of Americans say they eat pizza at least once a week.

It’s a no-brainer why we love pizza so much — it’s delicious! The legend goes that the first modern pizza was created in the 1880s in honor of Margherita, the queen of Savoy. But humans have been eating bread and cheese together for thousands of years, which just goes to show that it’s a flavor combination that really works.

Pizza toppings are a source of strong opinion, both in the United States and elsewhere. Hawaiian pizza continues to be a topic of contention, yet it is a popular pizza topping, even placing on the list of top 10 pizza toppings.

Sausage places at number four on the list of most popular pizza toppings! But there are many types of sausage that you will find used at pizzerias around the world — and even more that you can add to pizza at home! 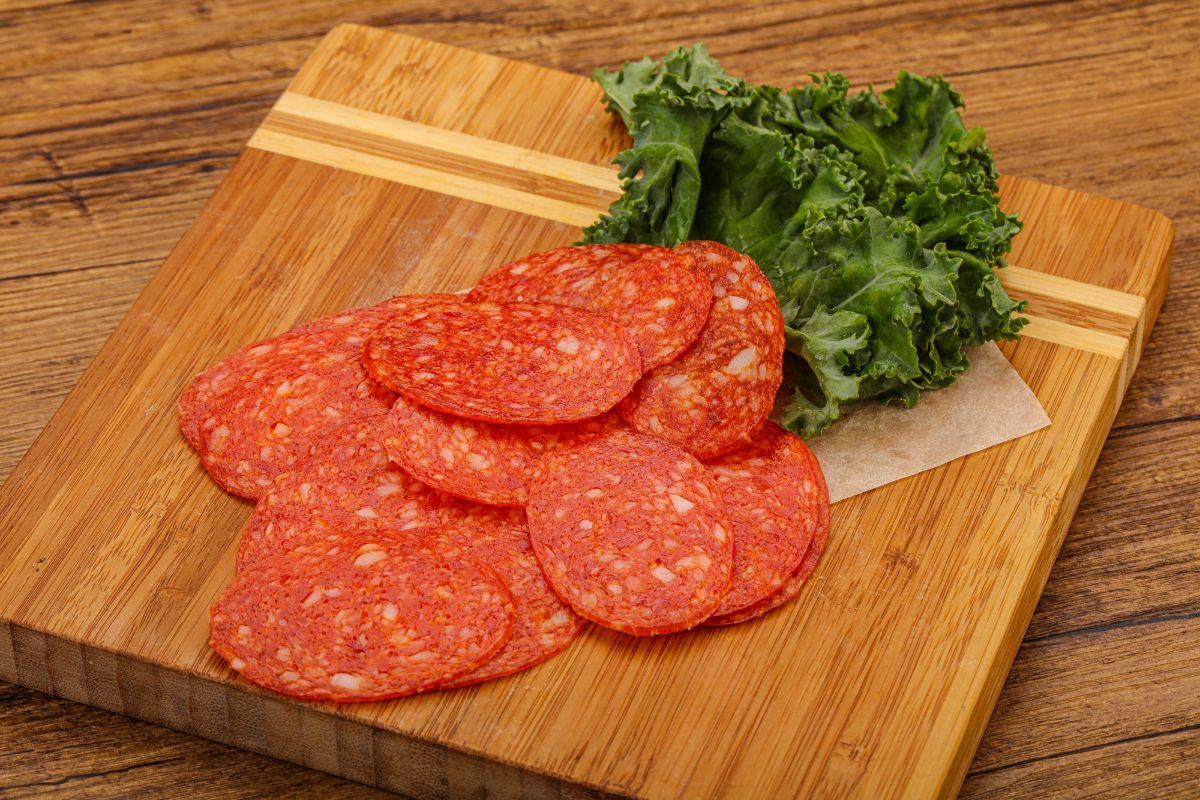 Pepperoni is by far the most popular pizza topping in the United States. It’s estimated that more than 30 percent of people order pepperoni as their topping of choice.

But even if you’re a pepperoni lover, you might not know that it’s actually a type of sausage! Pepperoni are an American form of salami, with a unique blend of spices.

The meat is usually a blend of pork and beef and flavored with paprika or chili, which is partially responsible for the pepperoni’s vibrant color. If you want a meat topping for pizza that is almost a universal favorite, you can’t go wrong with pepperoni. 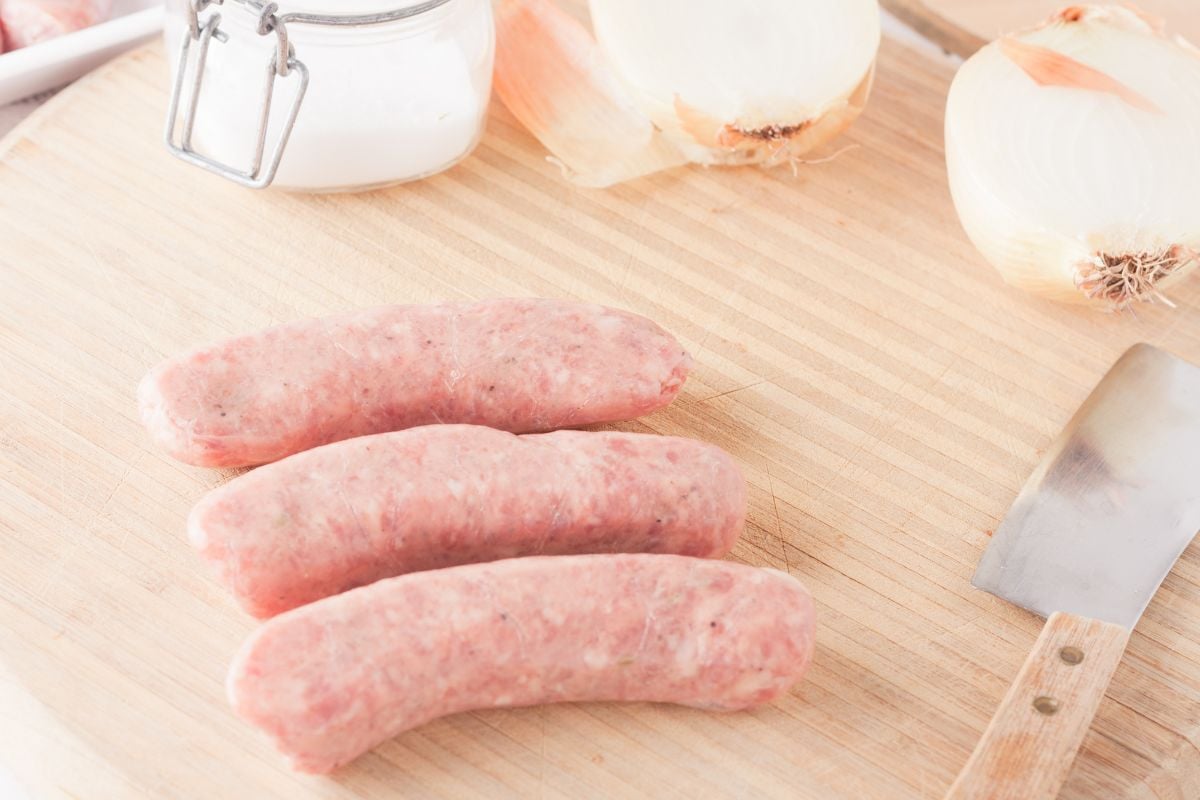 In the United States, Italian sausage is usually a type of pork sausage. While there is a range of flavors (generally sweet, mild, and spicy), Italian sausages are distinguished not just by the pork filling but also by the inclusion of fennel.

This gives the sausage a unique sweet, licorice note. Mild Italian sausage is usually seasoned just with salt and fennel, while sweet Italian sausage often has herbs included such as basil.

These sausages are deliciously soft and sweeter than most, pairing deliciously with the saltiness of pizza. (Bear in mind that this is the American classification of Italian sausage; don’t expect the same thing if you’re in Italy!) 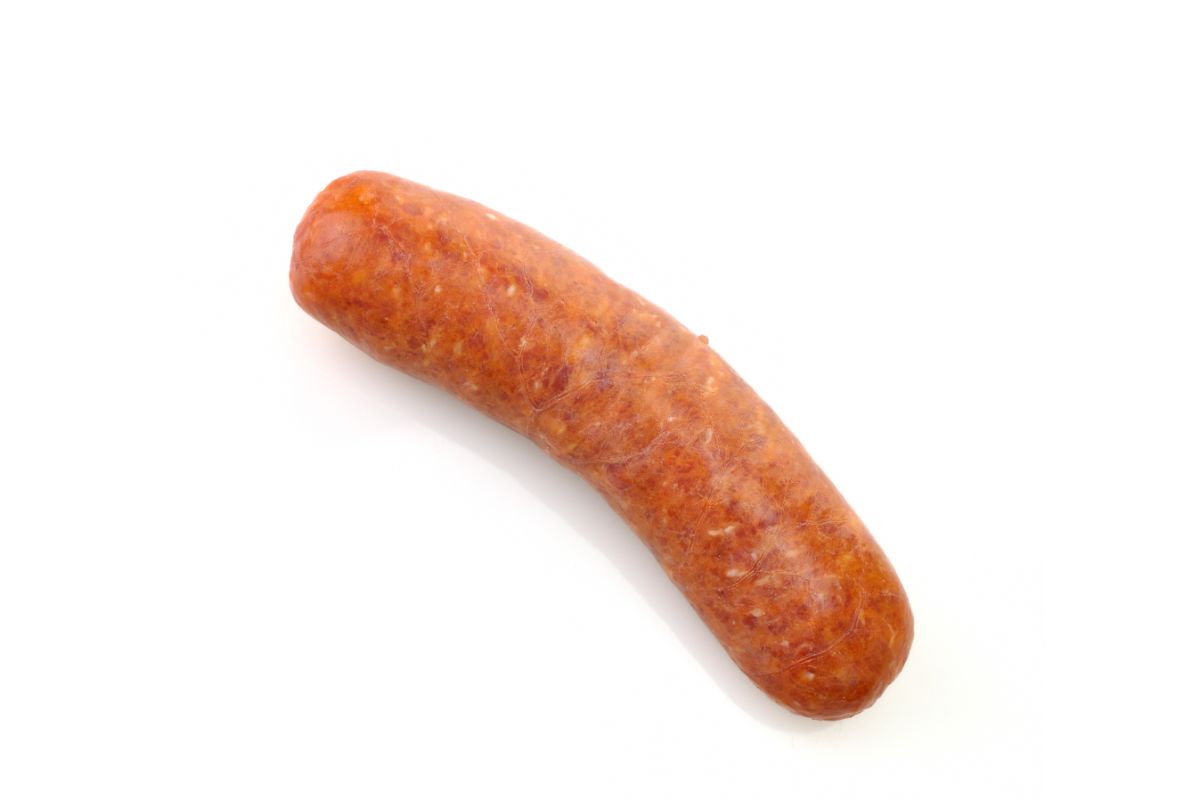 While all Italian sausage varieties are known for including sweet herbs like fennel, the hot variety really amps up the spices! Usually, hot Italian sausage is pork mixed with herbs as well as hot pepper flakes, chili, or paprika. The spice level can vary significantly from product to product, ranging from “mildly warm” to “get your eyes watering”.

Spice lovers will enjoy the extra kick from topping a pizza with hot Italian sausage, but if you’re planning for a party, make sure you have several options available — this might be too hot for some. 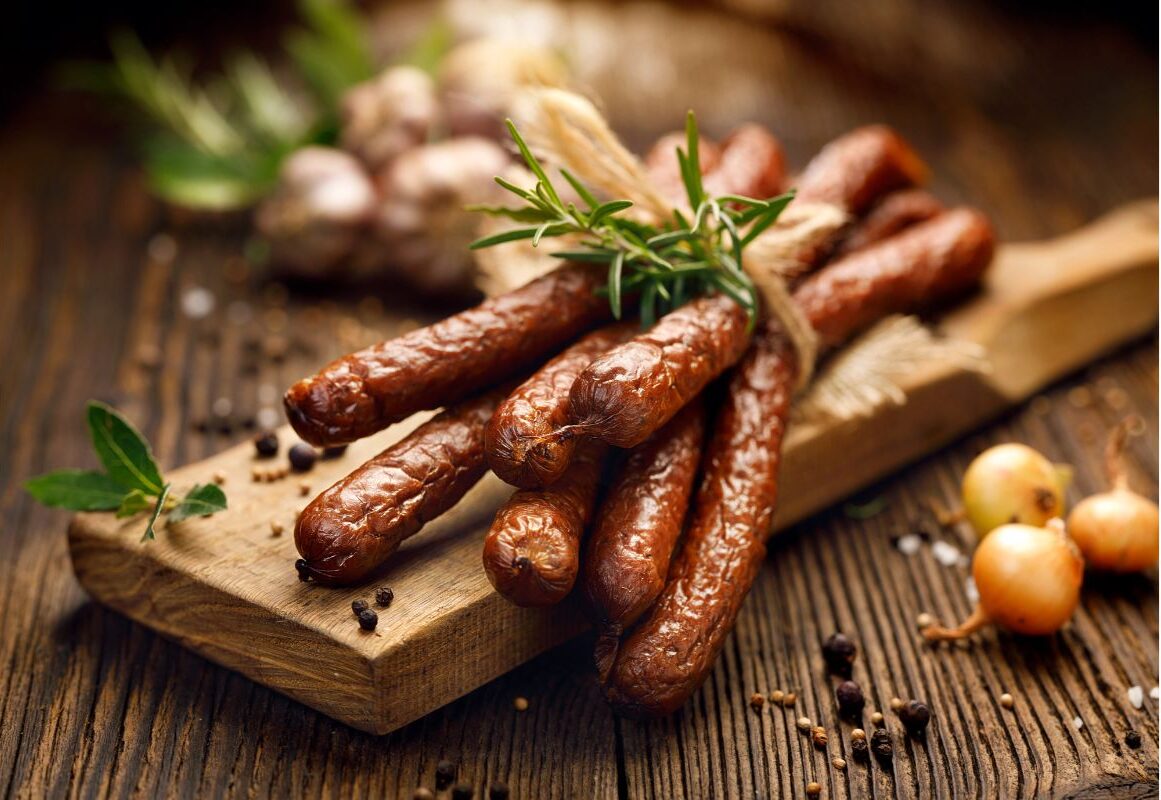 The word kielbasa refers widely to any kind of sausage that comes from Poland. It can be made with any meat or spice mixture. In the United States, the word usually refers to smoked pork sausage, often sold in a distinctive U shape.

If you feel like scouting out a specialty market, however, you may be able to find other variations, including uncured kielbasa. These sausage varieties may include distinctive Polish herb and spice mixtures, such as caraway seeds. Regardless, kielbasa is a deliciously hearty, smoky sausage choice for topping a pizza.

5. The Spicy Sausage With Notes of Vinegar: Chorizo 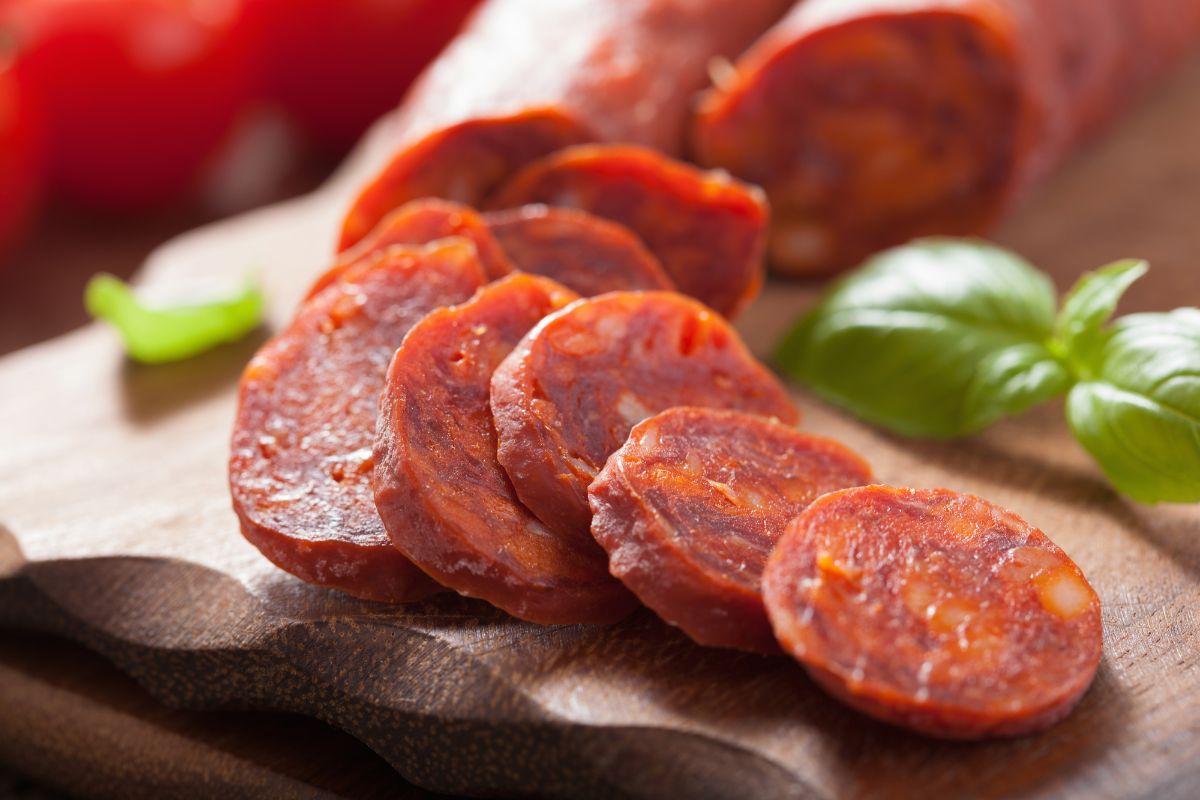 Chorizo is a type of fermented sausage that, in its original form, hails from Spain’s Iberian Peninsula. In the United States, the word often refers to Mexican-style chorizo, which often includes meats other than pork (including venison, beef, lamb, and more) and uses local chilies.

As a result, Mexican chorizo can really bring the spice! It is characterized by its unique flavor combinations of chili and vinegar, which is a favorite both in Mexico and the US. Unlike the traditional Spanish version, which is served cut into pieces, Mexican chorizo is usually ground, making it perfect for adding to your pizza. 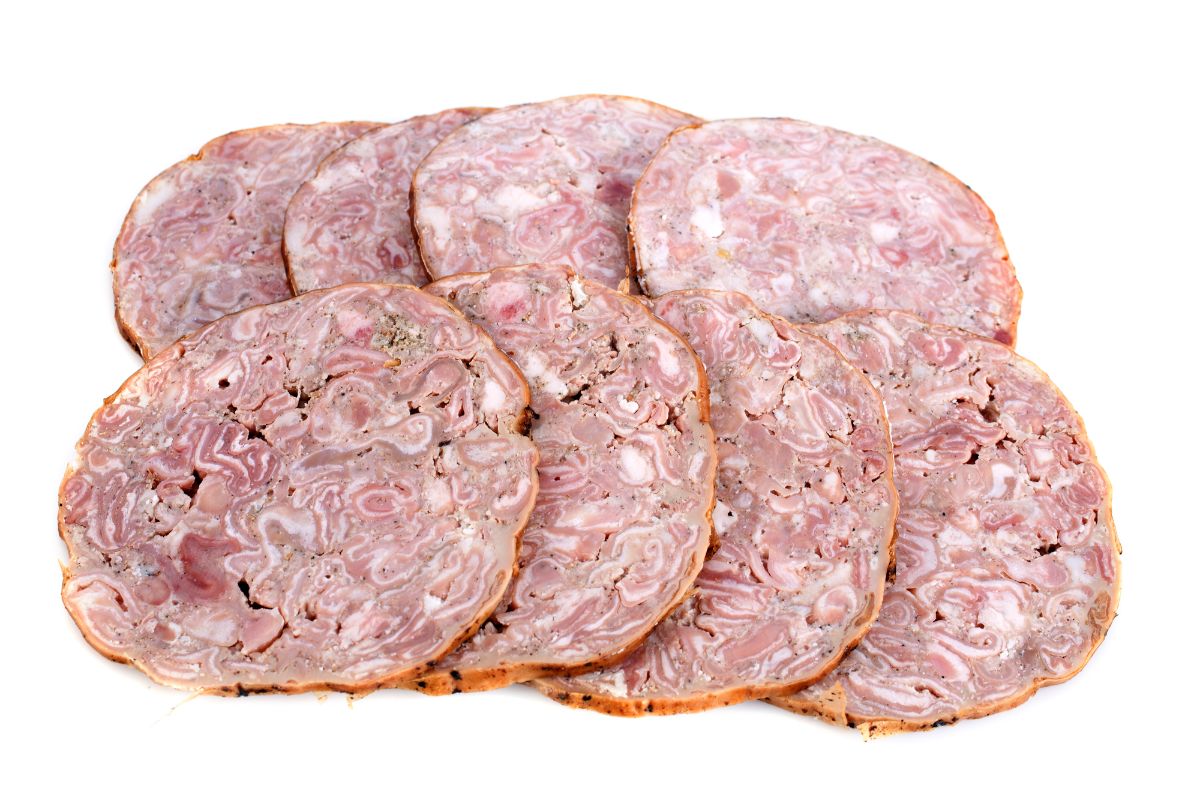 Andouille is a French sausage that comes in many forms and has traveled all over the world! In the United States, it is often included in Cajun cuisine, especially in traditional meals such as Jambalaya. Cajun-style andouille is a coarse, double-smoked pork sausage stuffed with peppers, onions, garlic, and spices.

It may also be made with wine. Because of this complex mixture, andouille has a distinctive spicy-sweet flavor. If you’re feeling adventurous, feel free to put it on top of your pizza. It just might become your new favorite! 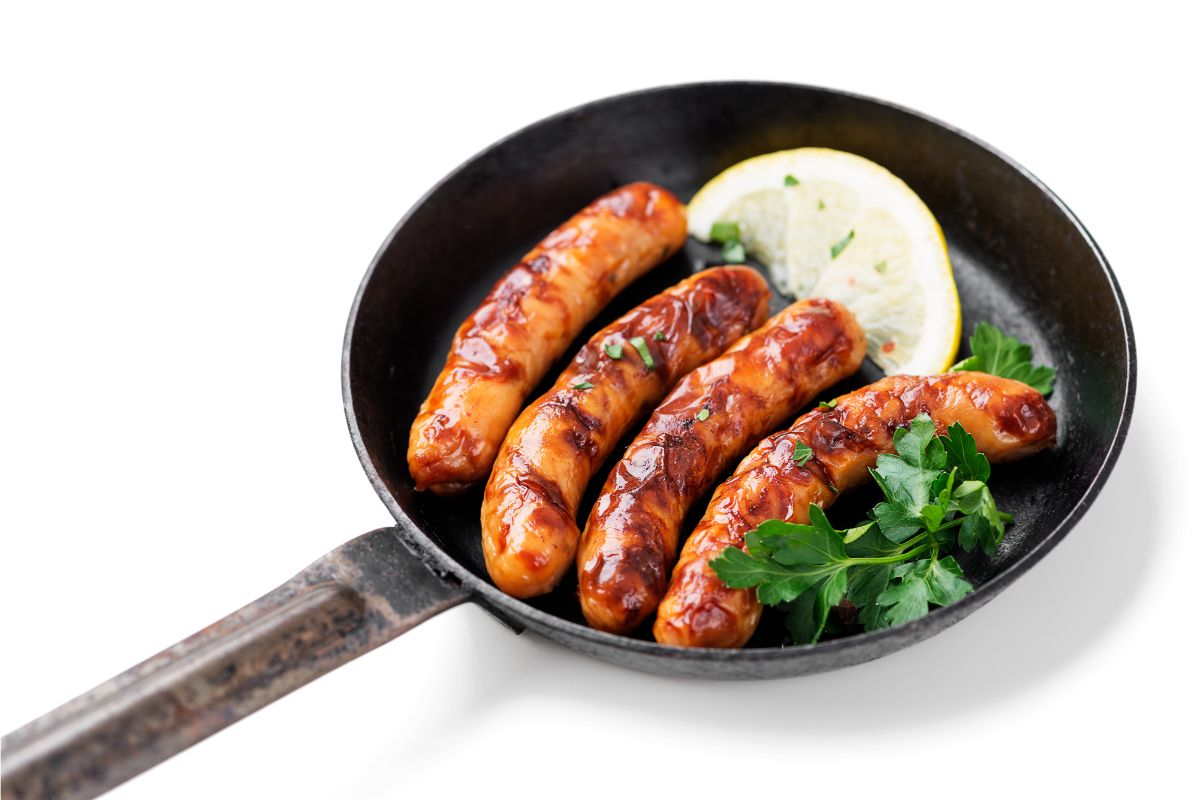 Did you know that breakfast pizzas are a thing? They might not be everyone’s cup of tea (or coffee, as the case might be) but they enjoy a dedicated fanbase and are absolutely delicious. Some breakfast pizza is served with other morning toppings such as fried eggs, but you don’t have to take it that far unless you want to.

You can always simply enjoy the salty-sweet addition of breakfast sausage on its own. Also called country sausage, this pork topping can be served whole or ground and usually involves maple syrup as well as paprika and other spices. 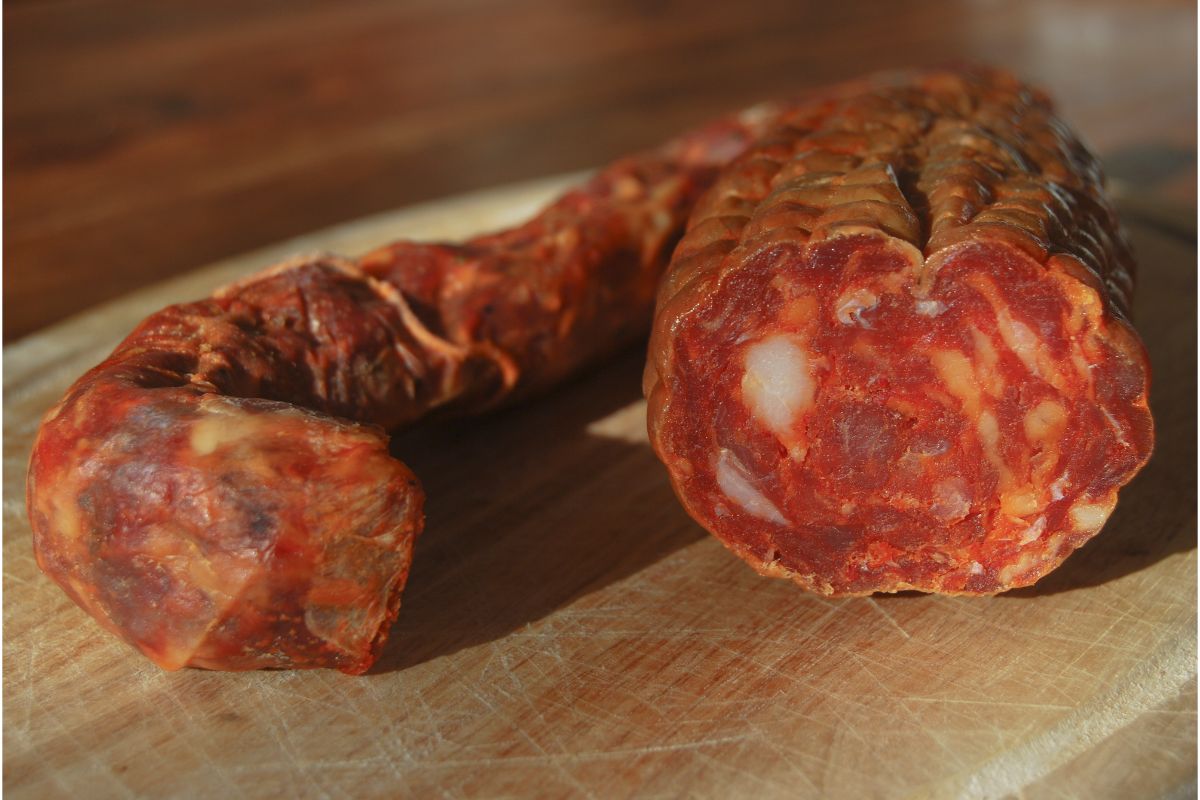 Hot soppressata is another form of spicy Italian sausage. It is made from pork, often lean cuts with less fat, then mixed with wine and other spices such as black peppercorns, dried chili peppers, and salt. These spices not only give the soppressata its heat, but also its distinctive red color.

Meanwhile, the lower fat content makes the soppressata firm rather than soft. While some people say that soppressata isn’t spicy as much as just warm and pleasant, others might find that it’s too hot for their tastes. If you love spicy pizza toppings, this is definitely one for you!

Almost everyone has had ground sausage on pizza. After pepperoni, it is one of the most popular meat toppings for pizza in the United States. Most of the time, ground sausage on pizza is made from pork sausage, often a style of Italian sausage. But from there, pizzerias may take it in any direction in terms of spices and seasonings.

You’ll find spicy ground sausage or the distinctive tastes of ground Italian sausage mixed with basil and fennel. This is also a great topping to use at home for homemade pizza, since ground pork sausage is widely available and cooks within a matter of minutes. 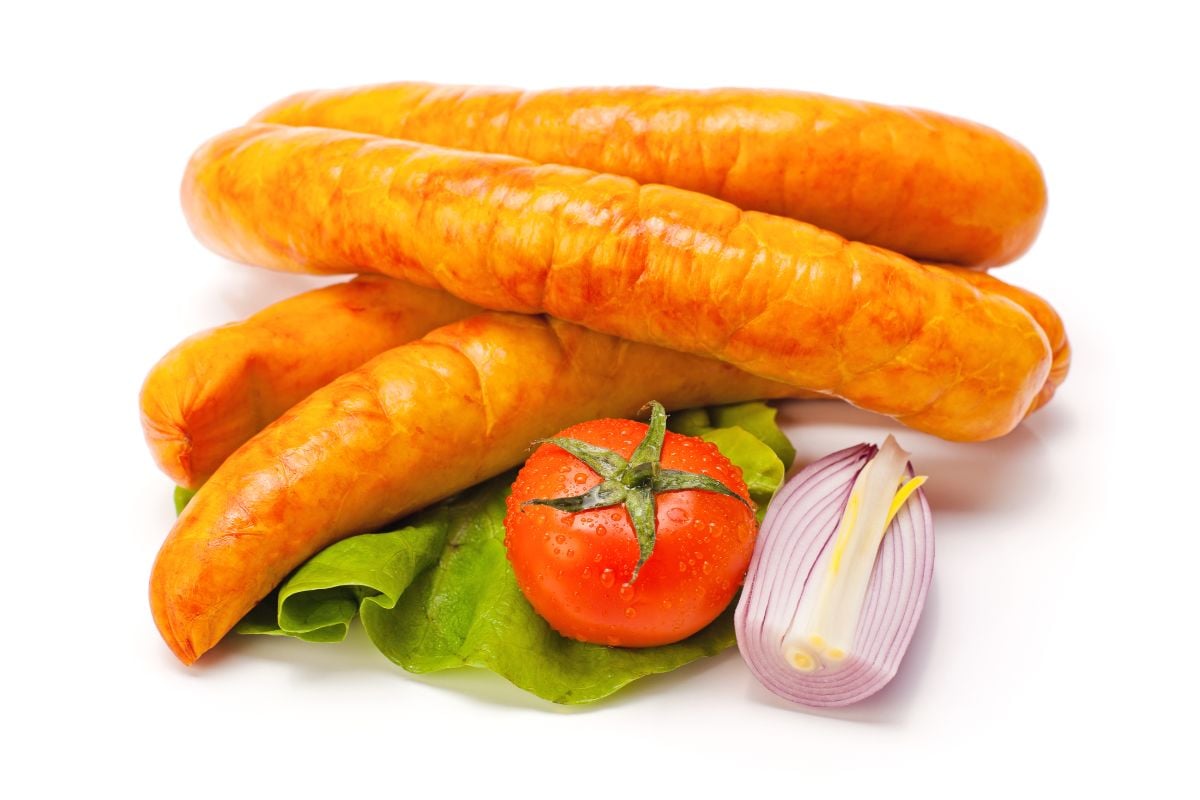 If you can’t resist a meatlover’s pizza but are trying to be a bit more health-conscious, consider swapping your red meat for turkey sausage. Turkey sausage is significantly lower in saturated fat than pork sausage, a big contributor to heart disease. This healthier meat is made from ground-up turkey, served either in a patty or as ground meat.

Either form is delicious as a pizza topping and is a good choice as an occasional treat for someone trying to watch their saturated fat intake. After all, just because you’re trying to eat healthy doesn’t mean you can’t have a slice of pizza now and again. 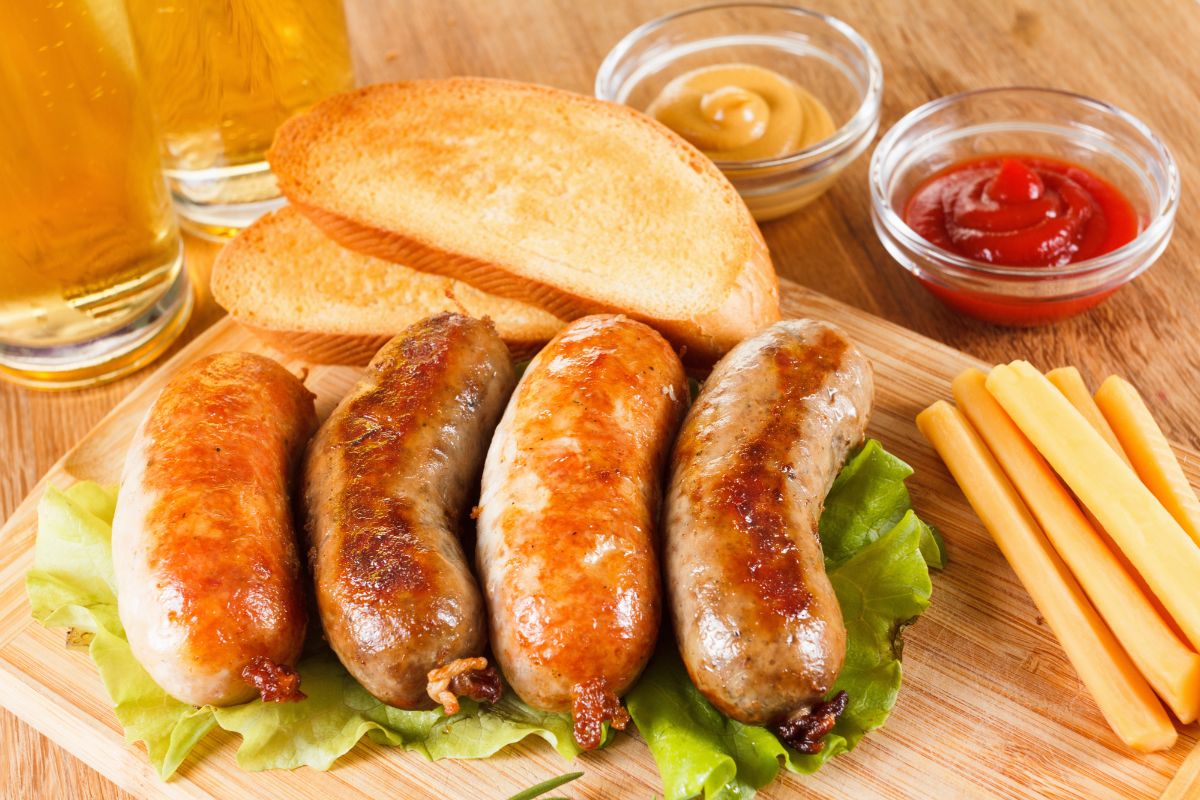 People who don’t eat red meat or who want a healthier meat on their pizza might enjoy topping their pie with chicken sausage. Like turkey sausage, this variety is low in saturated fat and offers a large serving of protein.

It bridges the gap between healthy and delicious, so you can enjoy the occasional slice of pizza even if you are watching your saturated fat intake. Of course, there are plenty of people who just enjoy the taste of chicken sausage more than pork sausage, which is yet another reason why it remains a great choice for topping a pizza! 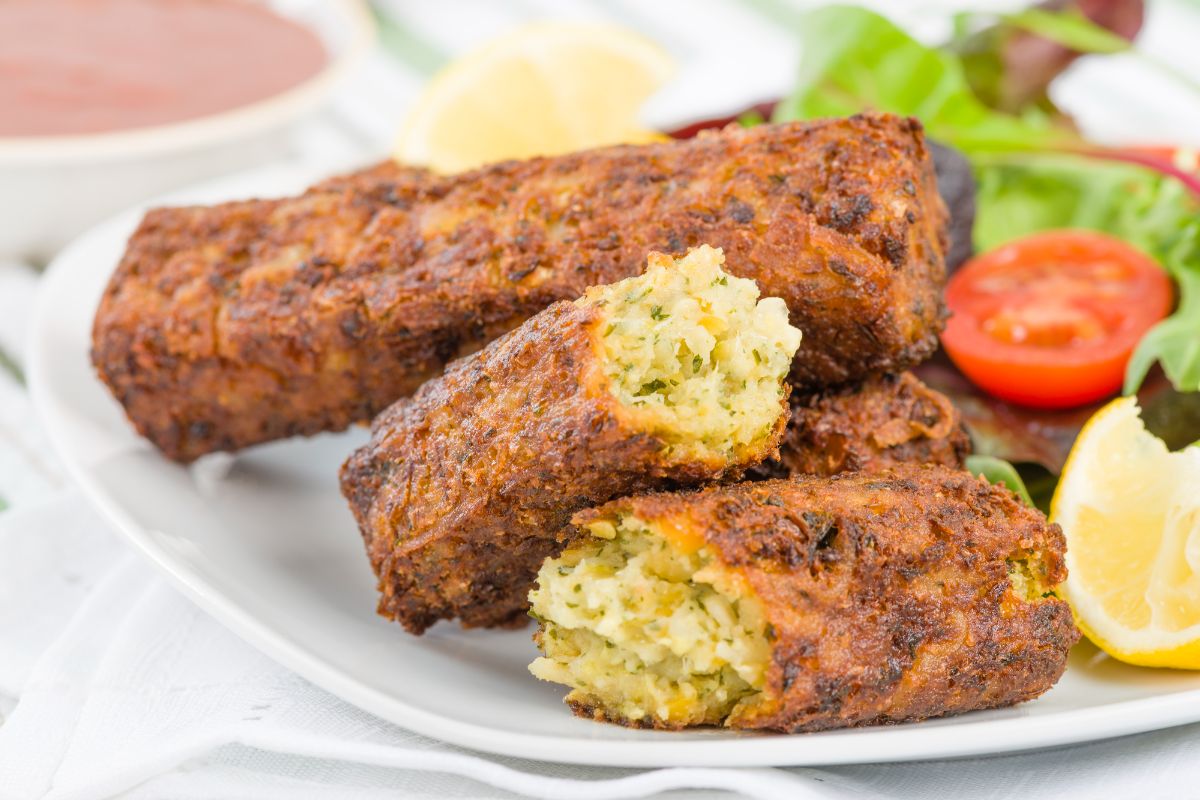 Even vegetarians can enjoy a sausage-topped pizza thanks to plant-based sausages becoming more widely available. Vegetarian sausage is similar in taste and texture to real sausage, and it is an increasingly popular choice at pizzerias around the country.

Some plant-based sausages are even vegan, often made from tofu or pea protein. It may also have a variety of herbs and spices in it, which can make it taste even more similar to true meat. You can even make your own vegetarian sausages at home. Some recipes use ground lentils as a base for other herbs and flavorings.

Should You Cook Sausage Before Putting it on Pizza?

While you might see people adding raw sausage to the top of their pizza at home, this isn’t the safest method. Instead, make sure to cook it through before you add it as a pizza topping to avoid undercooked meat and cross-contamination from raw meat juices.

If using ground sausage, simply brown it in a pan before adding. Otherwise, simply make sure the sausage is fully cooked either on the stovetop or in the oven before slicing and topping the pizza.

What Type of Sausage is Used for Chicago Deep Dish Pizza?

If you live in or around the Chicago area, you have probably heard strong opinions on the type of sausage you can or should put on a deep dish pizza. Chicagoans take their pizza seriously and are dedicated to tradition.

The simple answer is Italian sausage, though you’ll find it served in many different ways. Some Chicago pizzerias dice the sausage finely and sprinkle it on top. Others even pound the sausage to a disc and serve it as a top “crust” of meat.

See also  Can You Use Breakfast Sausage on Pizza?
Click here to cancel reply.