Pizza is one of the most loved foods in America. It has a distinct smell that you can recognize anywhere. There are so many different varieties and types of pizza.

People have been experimenting with pizza for years but putting all kinds of toppings from fried eggs and macaroni and cheese on their pizza. If you would like to read all about the different types of pizza, you are in the right place.

Pizza originated in Italy but has become a beloved food in the U.S. It typically has a flat, round base created from the leavened wheat dough. Pizza is topped with tomatoes and cheese, and many other ingredients. Pizza is baked at high temperatures and traditionally in a wood fire oven. 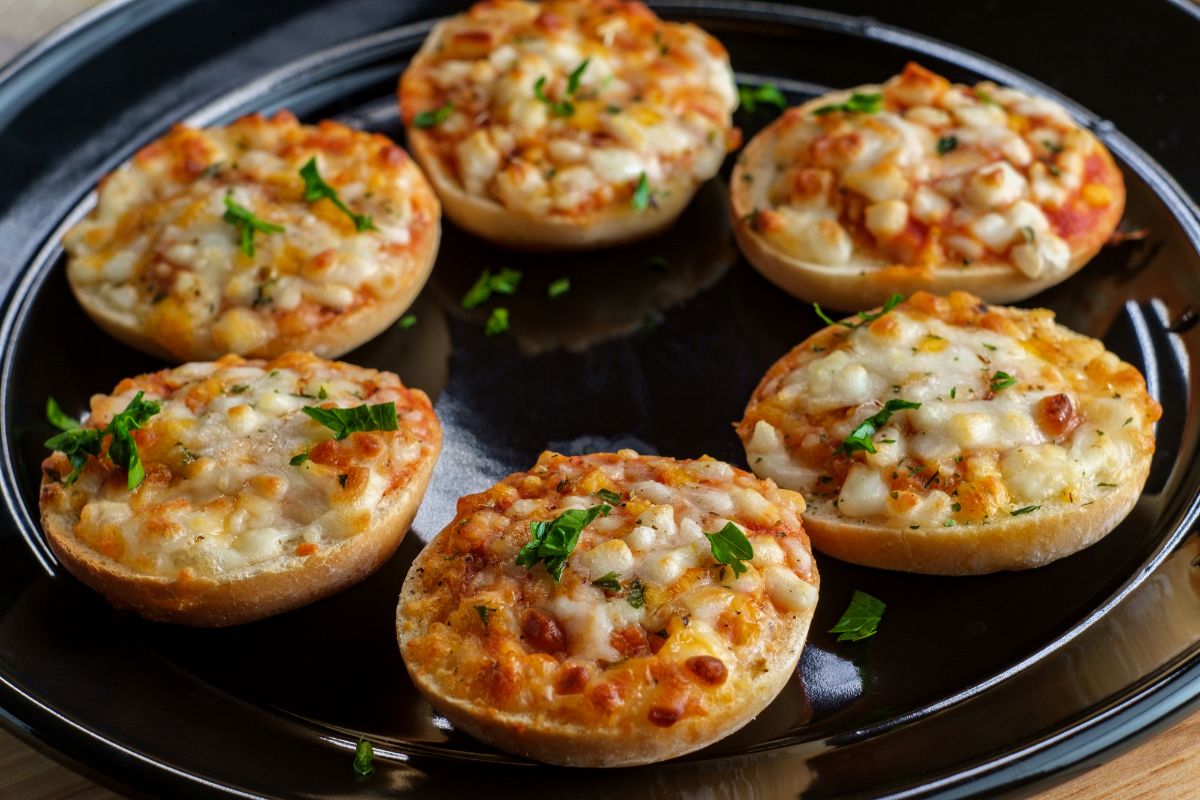 A bagel pizza is a small pizza that is easy to create whenever you want. The crust of this pizza is a bagel. You add any toppings you wish to add to the pizza and cook until it is golden.

This is a perfect pizza for one. You can use a regular size bagel or a mini bagel. These can be a light meal or snack. You can use any kinds of toppings, including cheese, sausage, pepperoni, and onions. 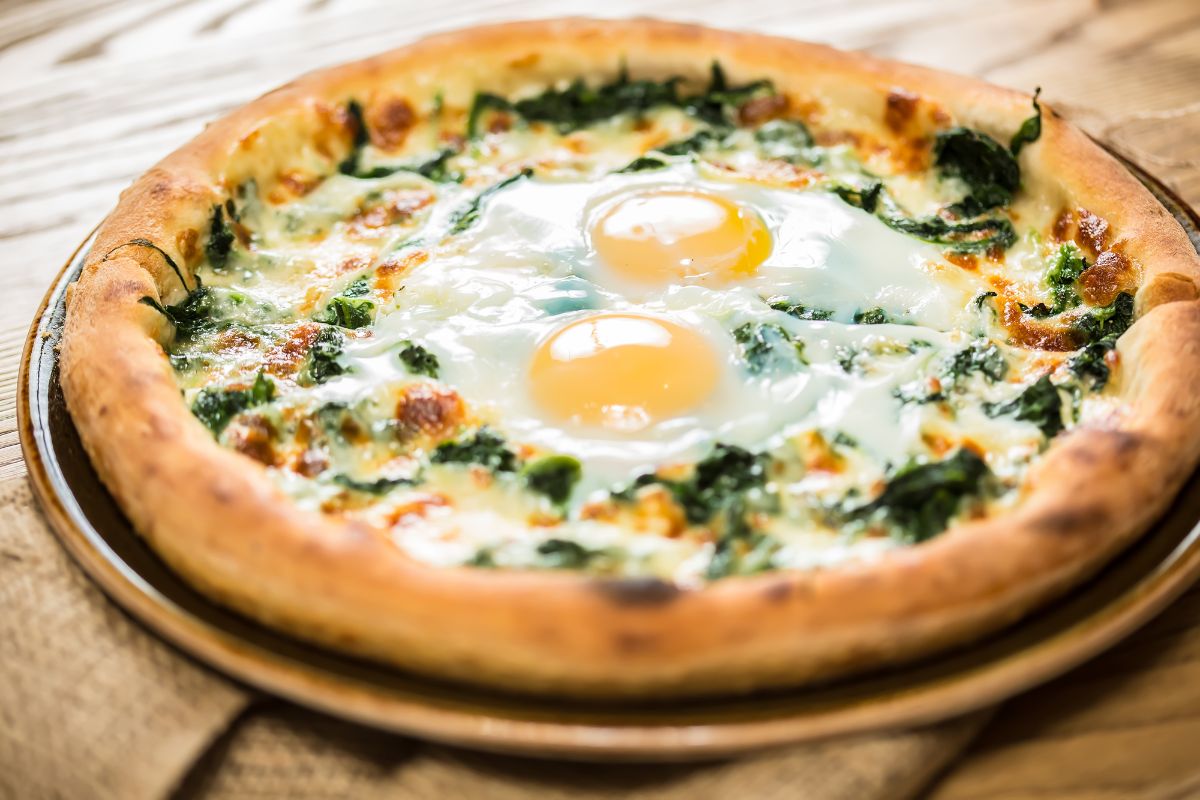 Breakfast pizza is an excellent option for brunch. While you may not want to eat breakfast pizza early in the morning, it might be a great option around mid-morning. Typically toppings include bacon, eggs, cheese, potatoes, and sausage.

You can even find breakfast pizza with smoked salmon and vegetables. With breakfast pizza, you cook the base first and then add ingredients and bake it all until it is golden. 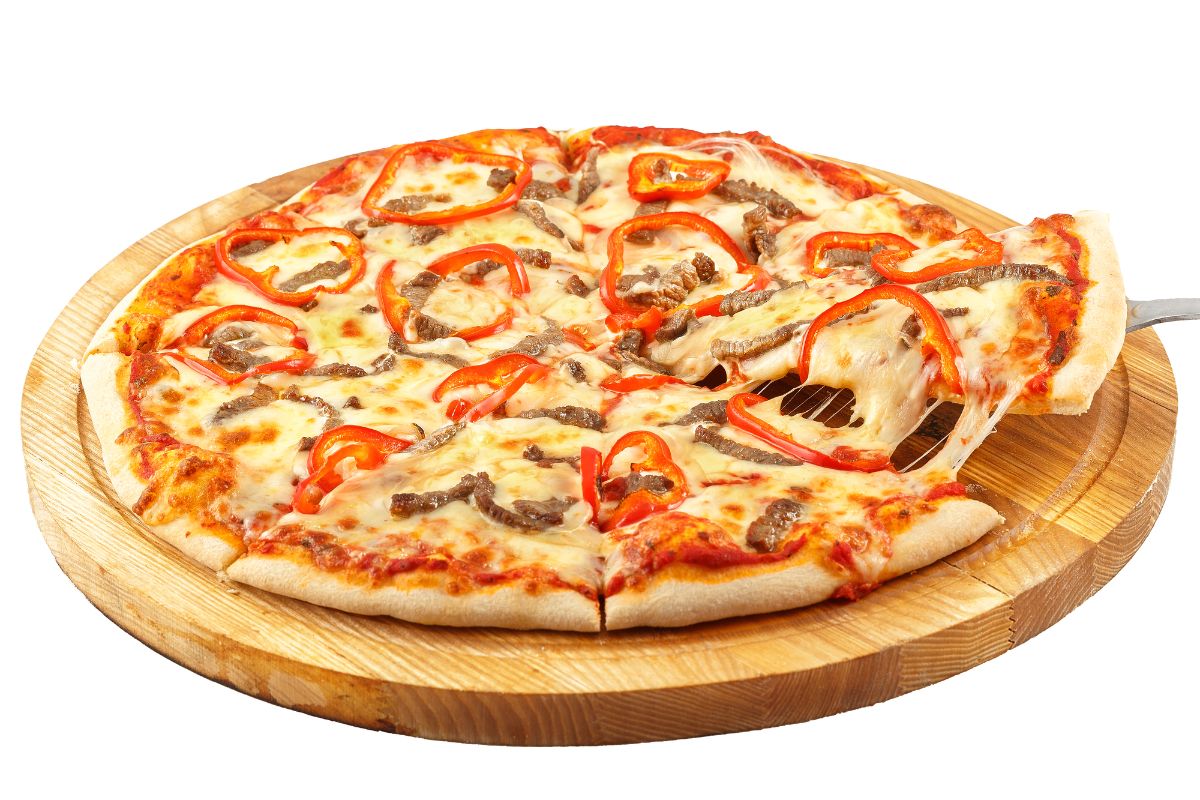 California pizza is considered a gourmet pizza and is well-known for having different ingredients. This pizza first made its appearance in the late 70s. There are no traditional ingredients for a California pizza.

Instead, it can include elements like artichokes, goat cheese, and BBQ chicken. You may also find goat cheese, red onions, and baby vegetables. It can have either a thin or thick crust. This pizza uses fresh ingredients that are seasonal and local. 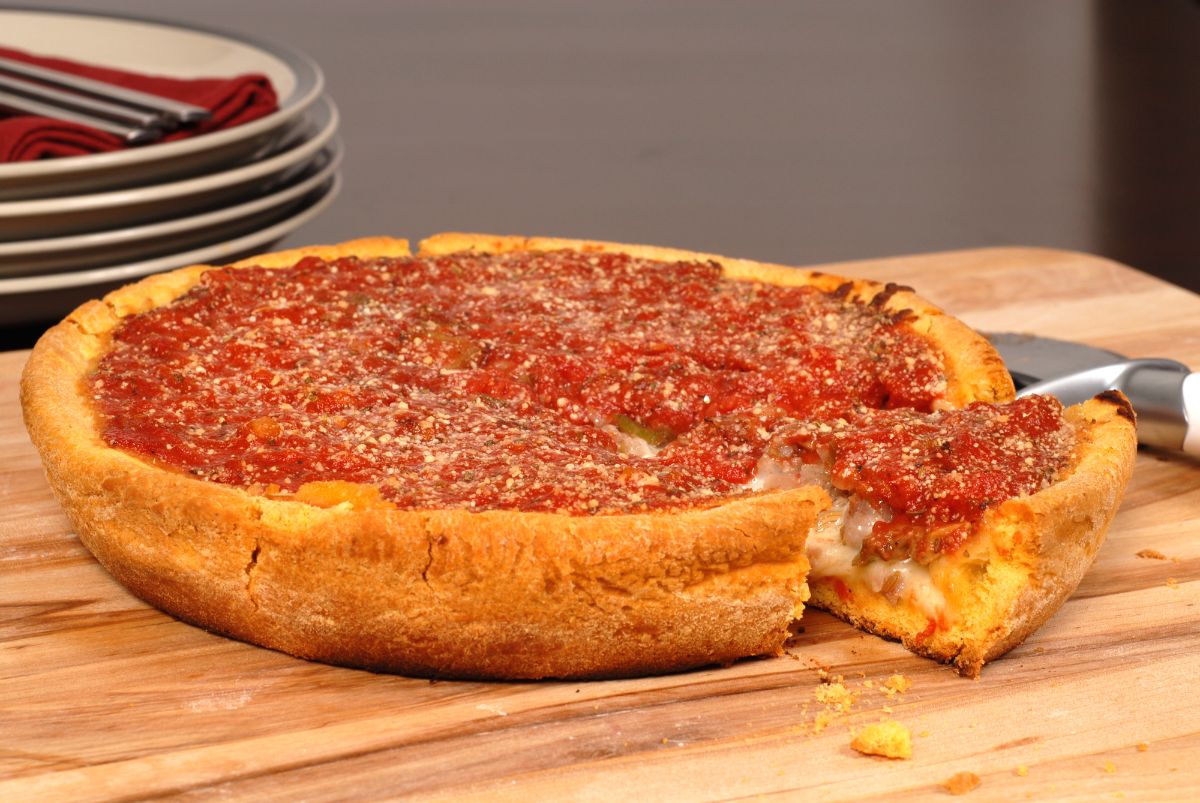 Chicago pizza is also referred to as a deep-dish pizza. Chicago is the city where this type of pizza was invented. This type of pizza often contains sausage, pepperoni, ground beef, mushrooms, green peppers, and onion. For Chicago pizza, the sauce is placed on top of the other ingredients and not the other way around.

Often these pizzas have parmesan cheese sprinkled across the sauce. To get the pizza out of the pan easier, you should oil it. When there is oil on the pan, the base of the dough bakes up crisper. These pizzas take longer to bake because of the thick crust. 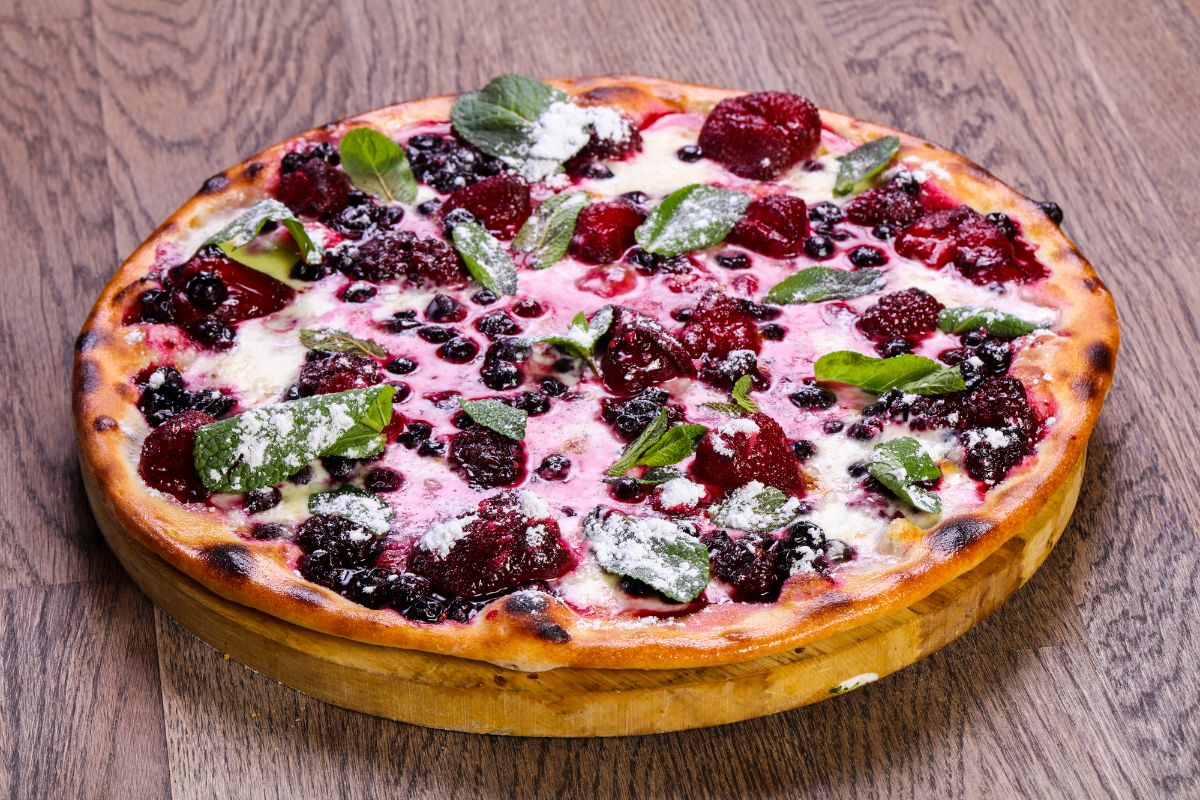 Pizza is typically savory, but there is a sweeter option. A dessert pizza is a sweet option that you should try at least once. Traditional toppings on a dessert pizza are caramel, chocolate, fruit, nuts, and cream. You may also find that these pizzas have marshmallows on them. 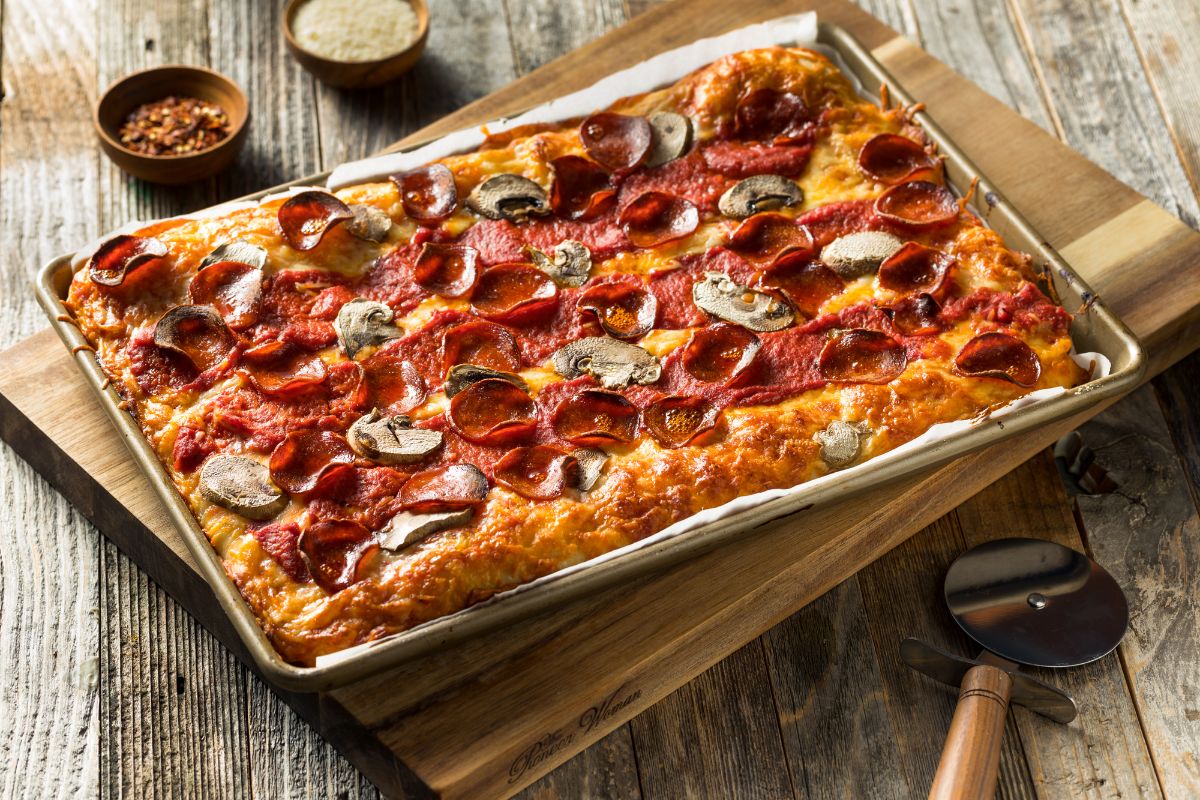 Detroit style pizza is a thick rectangular pizza that has a chewy crust. The crust has butter brushed on the bottom before it is baked. This gives it a crispy crust. Traditional toppings on a Detroit style pizza are tomato sauce, cheese, mushrooms, and pepperoni.

Another secret to Detroit pizza is that the dough is made the day before it is baked. You are most likely to find Detroit Pizza that has pepperoni on the crust, followed by Wisconsin brick cheese. This cheese is spread to the edges of the pan, then the sauce is spooned over the entire pizza.

This pizza is similar to a Chicago style pizza. This pizza has a thick and crispy crust that is airy and tender on the inside. When putting the pizza together, the air is pushed out of the dough and up the sides to the edge of the pan. Cook the pizza at the highest temperature, which is 500 to 550 degrees. 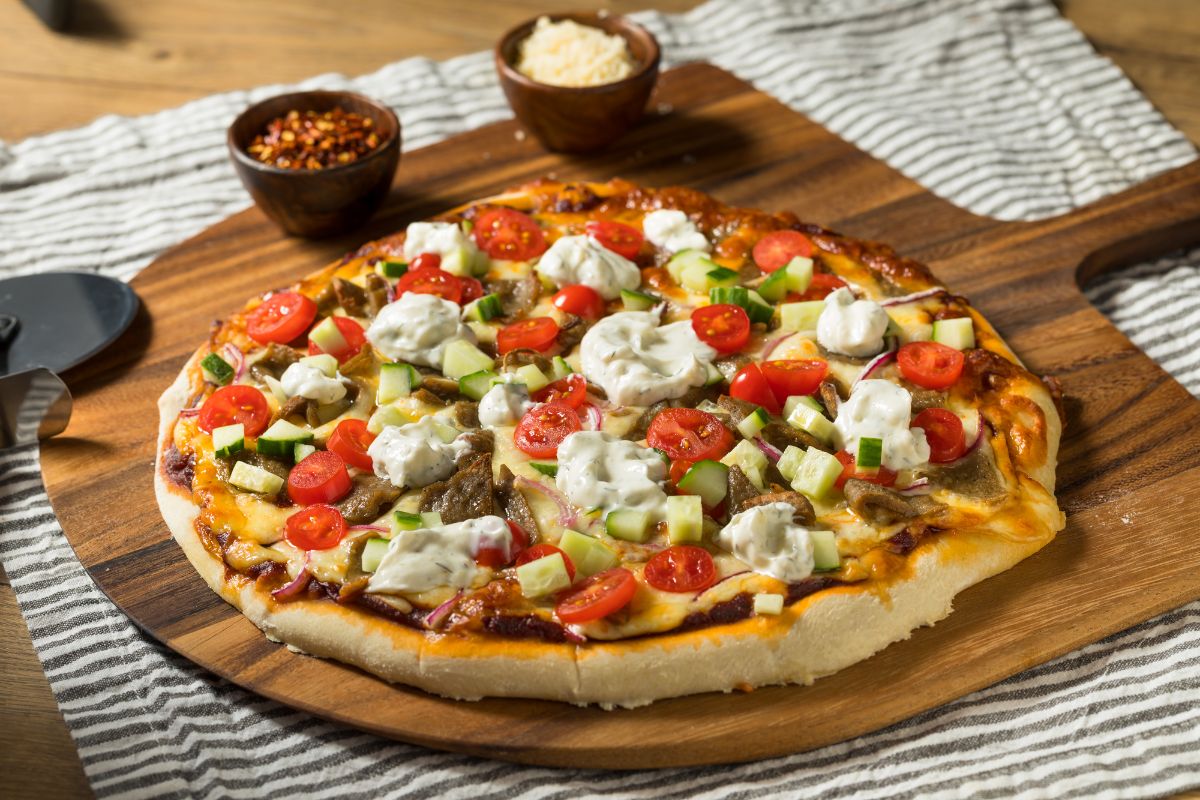 Greek style pizza is popular in the New England states. This pizza has a chewy and thick crust. The pizza is cooked in a shallow and oiled pan that creates a deep fried bottom. The crust is chewier and puffier than a thin crust pizza, but it is not as thick as a deep dish crust. 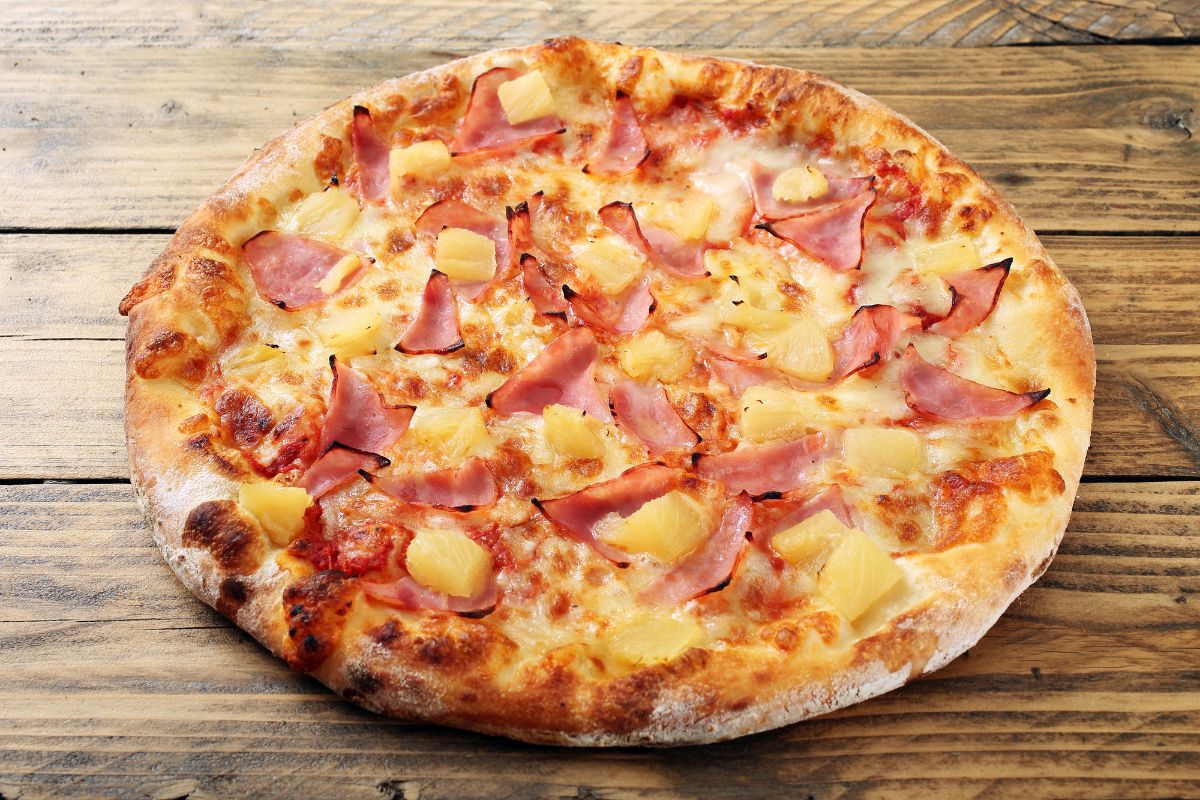 A Hawaiian pizza is an exciting twist on a traditional pizza because of its ingredients. It usually has an average style crust that is not too thick or too thin. It is topped with ham and pineapple. These toppings give the pizza a sweet and salty combination. Sometimes you will also find it topped with onions or peppers. 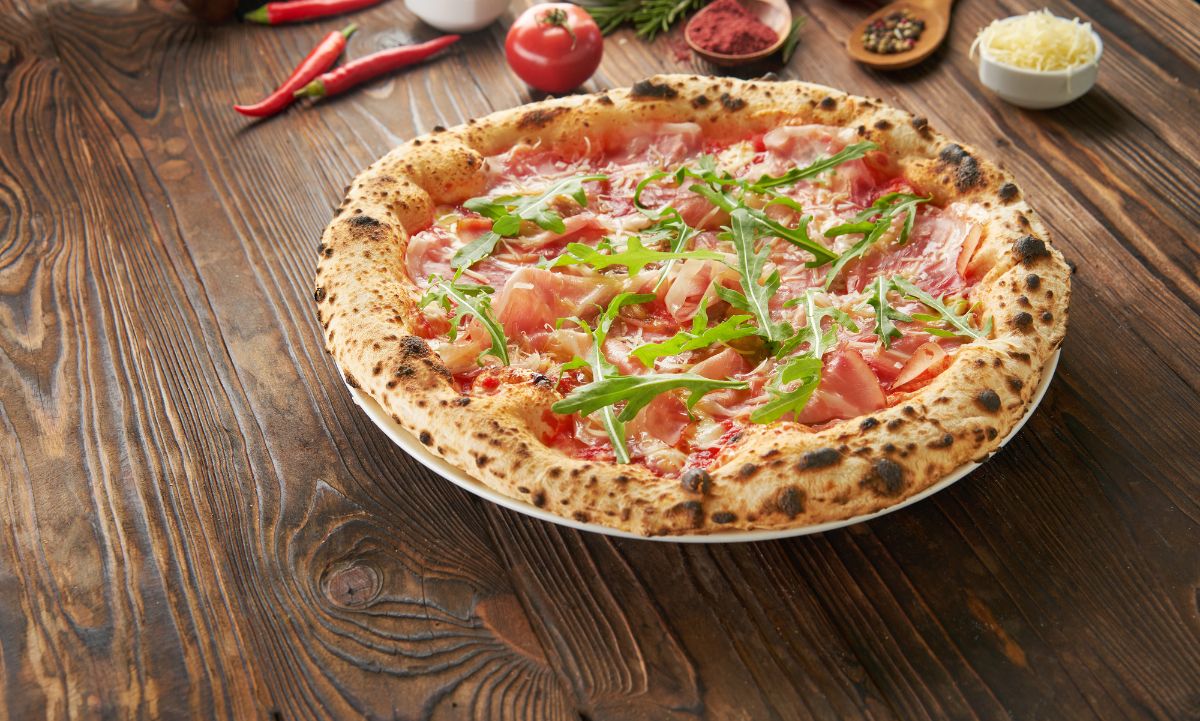 Neapolitan pizza is also known as Napolitana or Maple-style pizza. This pizza originated in Naples, Italy. It has a basic and thin crust along with fresh toppings. Traditional toppings for this pizza include mozzarella cheese, San Marzano tomatoes, and basil.

When making this pizza, it is essential that you find authentic ingredients. In addition, you have to use an intensely hot oven. Neapolitan is a thin pizza typically eaten with a fork and knife. To have an authentic Neapolitan pizza, you must cook it in a wood burning oven at temperatures that range from 800 to 1,000 degrees Fahrenheit. It only takes about a minute to cook.

There are three variations on Neapolitan pizza: 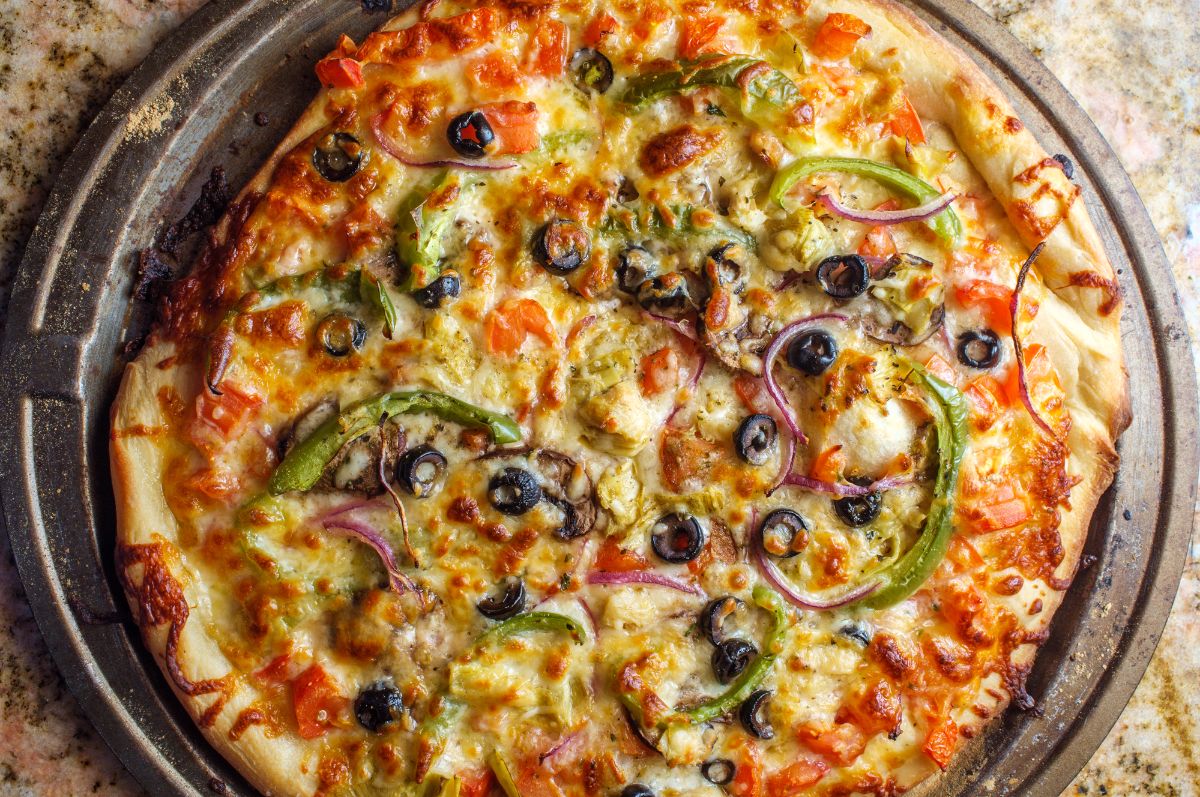 New York style pizza stands out because of its large slices that are meant to be folded. This crispy crust pizza is considered one of the most famous regional pizzas. Some believe it has a unique flavor due to the minerals in the water supply in New York.

The most common way you can find New York pizza is with mozzarella cheese and tomato sauce. However, you can also find a wide variety of toppings, including sausage, mushrooms, and pepperoni. It is often topped with condiments like garlic powder, red pepper flakes, oregano, and Parmesan cheese.

This thin pizza is cooked at a slightly lower temperature because of the low moisture content of the mozzarella. It is common to see this pizza sold by street vendors making it an on-the-go snack. Eating on the go is one of the reasons why folding it is essential. 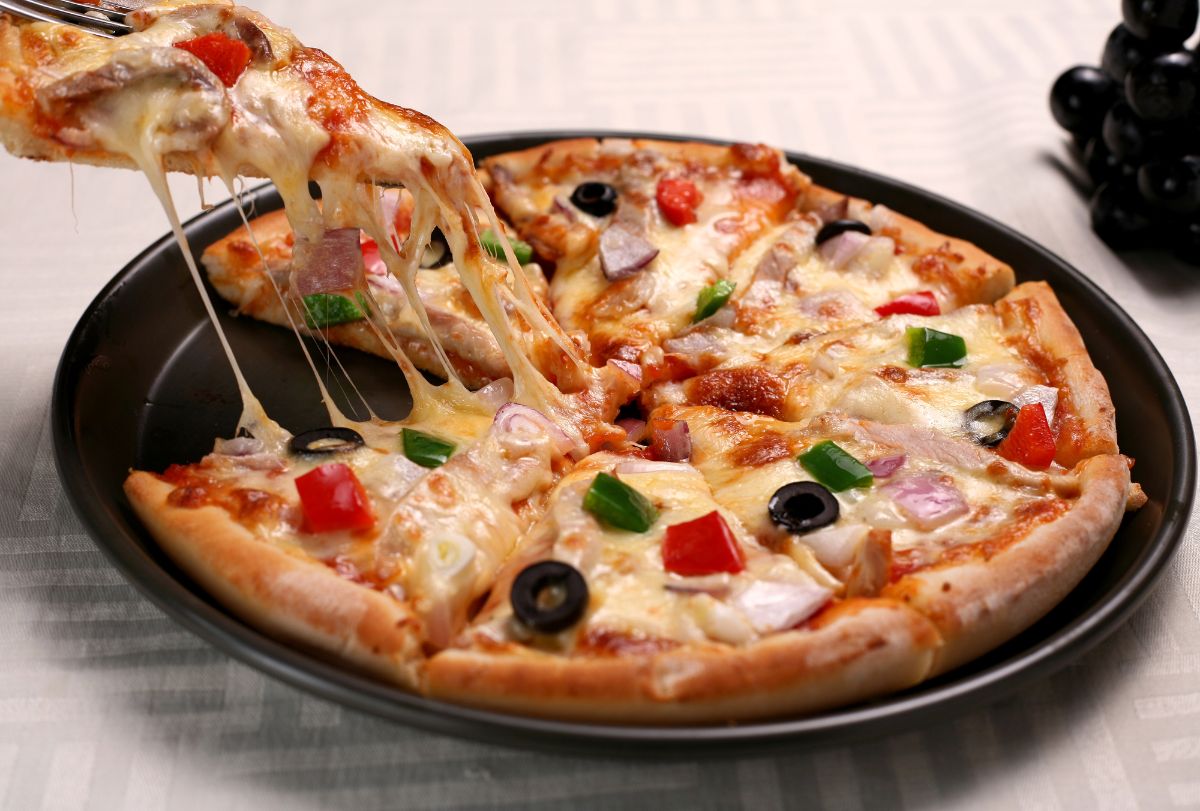 Pan pizza can be any style of pizza; however, it must be cooked in a pan with oil. This type of pizza is thick with a crispy and caramelized crust. Pan pizza originated in Kansas and has become one of the most popular pizza types. 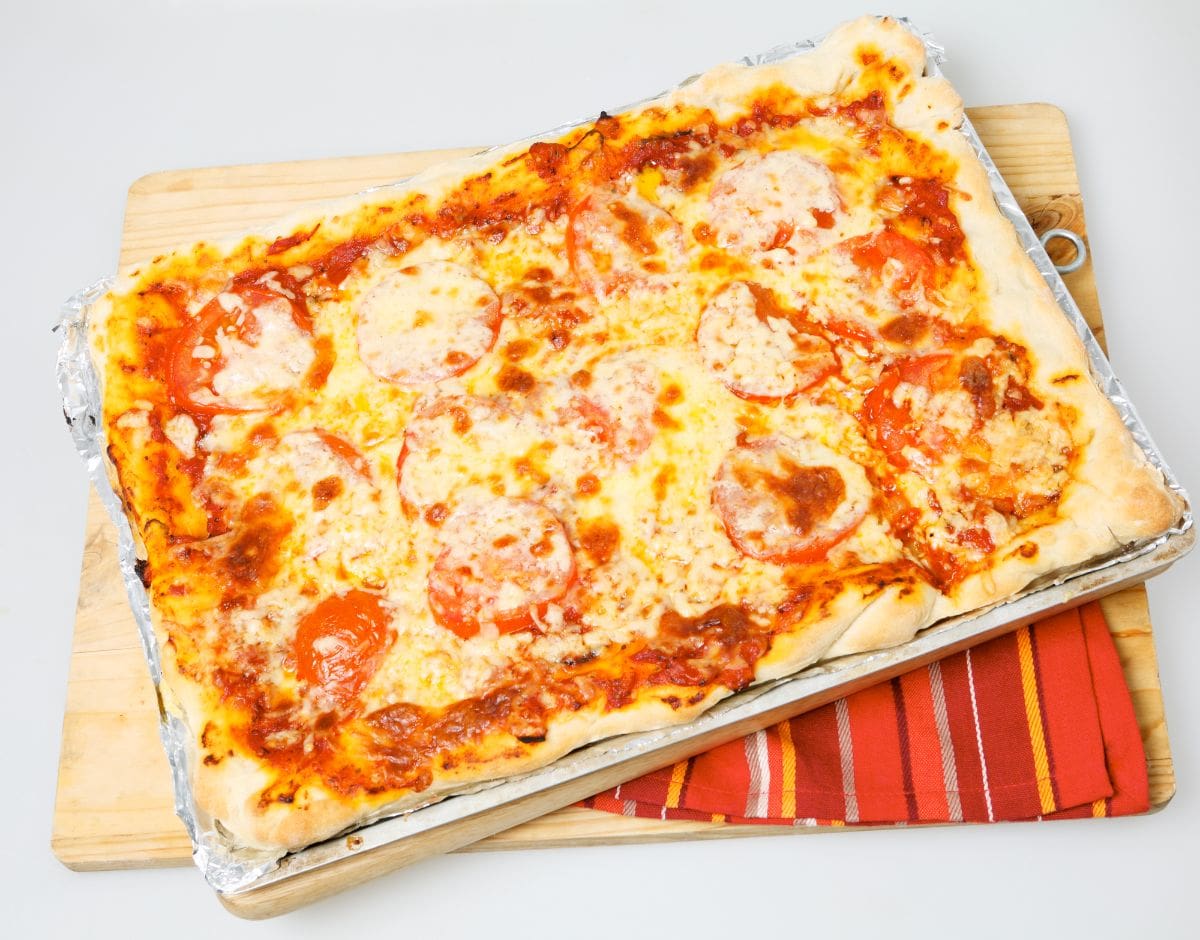 Sicilian pizza is rectangular with a crust that is at least one inch thick but could be thicker. It originated in Sicily, Italy. This pizza has a soft and chewy crust similar to focaccia bread.

It had various toppings, including tomatoes, cheese, onions, and herbs. It is commonly sold with or without the cheese. It often has a robust tomato sauce. 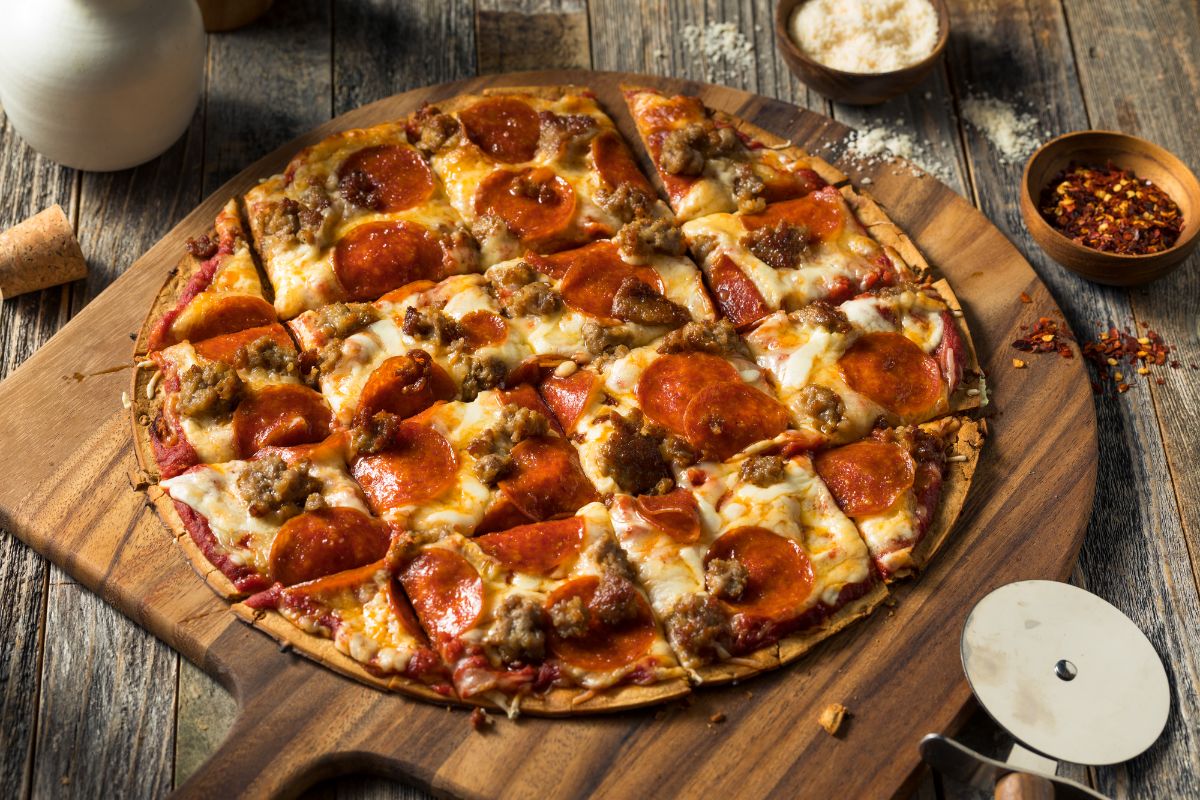 St. Louis pizza has an incredibly thin crust that is similar to a cracker. This dough is made without yeast, so it does not rise. The crust contains three simple ingredients: water, olive oil, and flour.

This pizza is typically cut into three or four inch rectangles. It is often referred to as party cut or tavern cut. This pizza has a cheese blend that consists of Swiss, cheddar, and provolone cheeses.

St. Louis pizza usually has a sweet sauce with a lot of oregano. The firm crust allows you to add as many toppings as you want without them falling off. This pizza is typically cooked on a pizza stone. 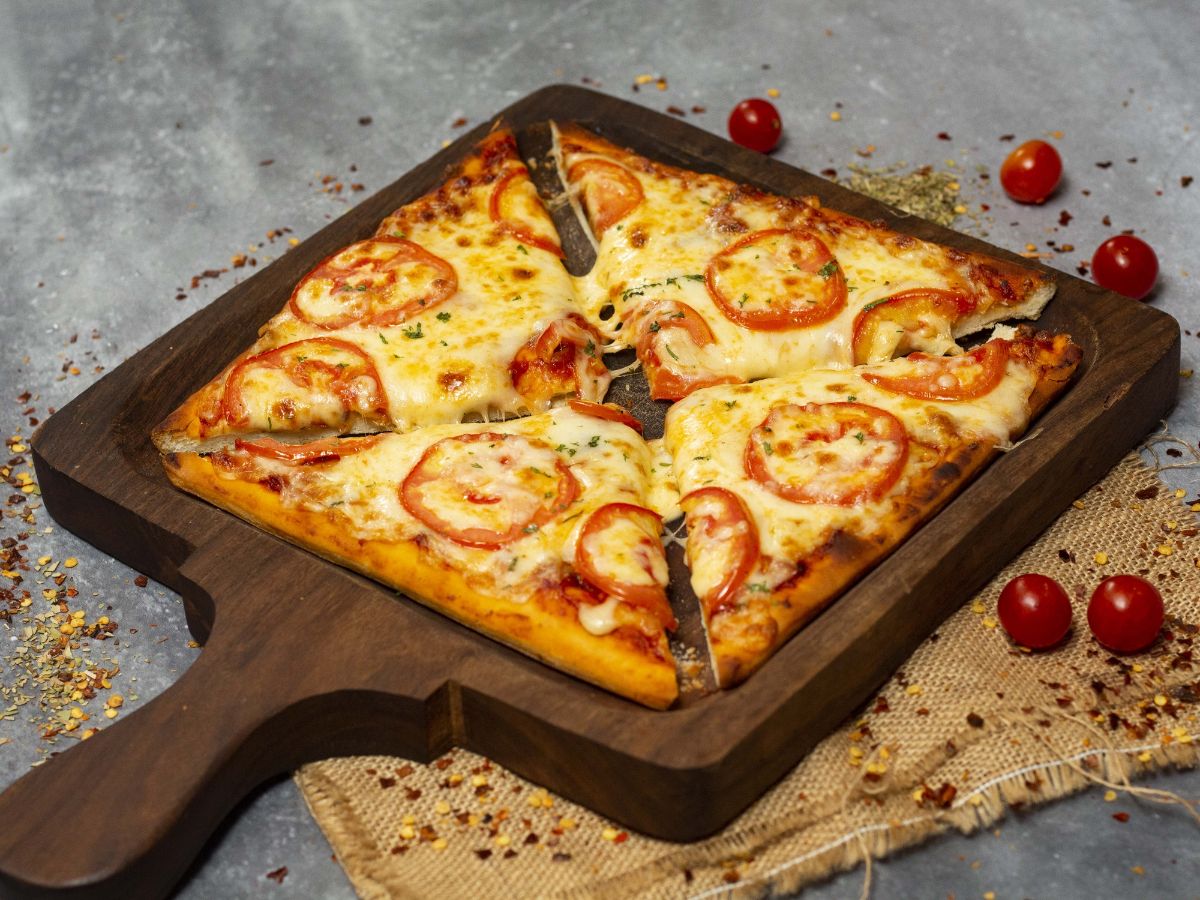 Square pizza is a reference to how the pizza is cut more than what is on it. You will find square pizza cut into small, bite-sized squares and not triangles. This pizza is excellent as an appetizer or to serve at a party. 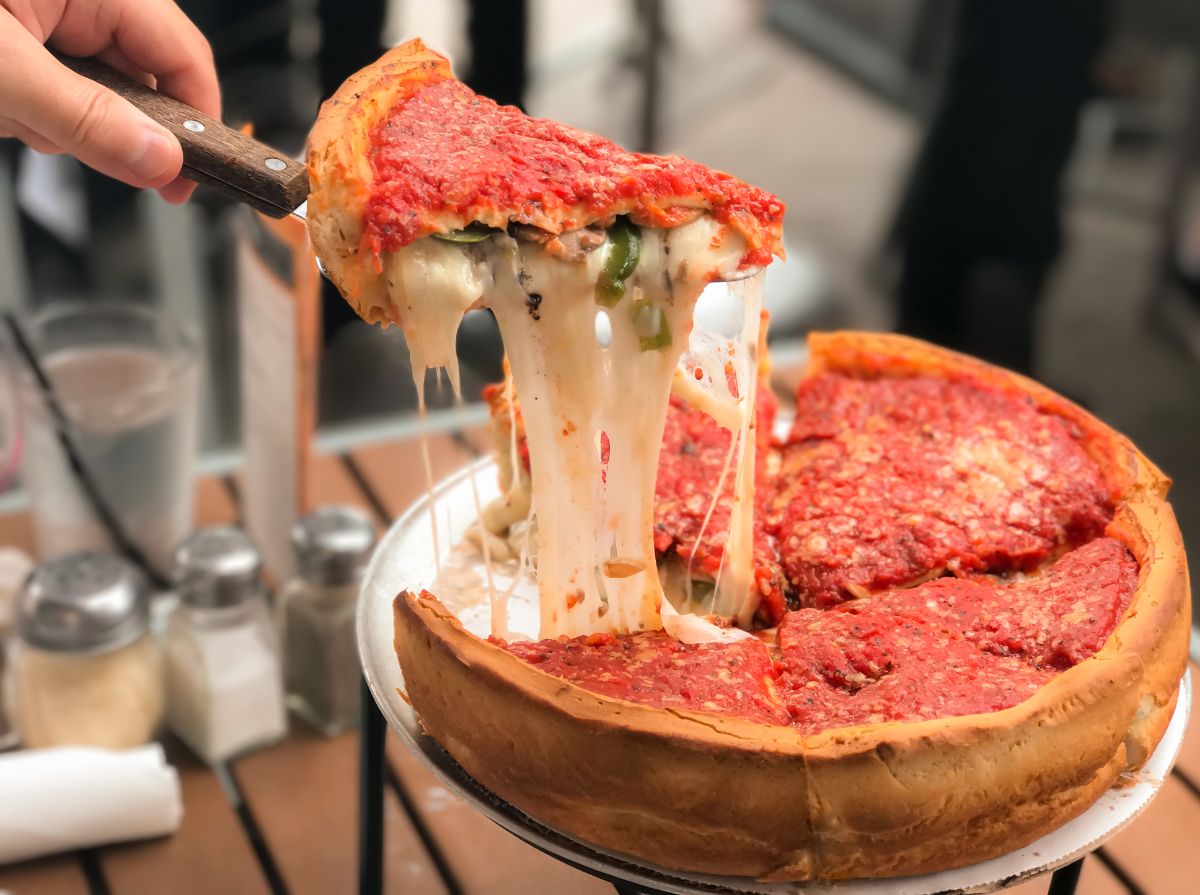 Stuffed pizza is denser and is filled with toppings. It is unlike traditional pizza that has toppings on top of the pizza. Instead, you can find stuffed pizza with cheese, meat, sausage, and vegetables. 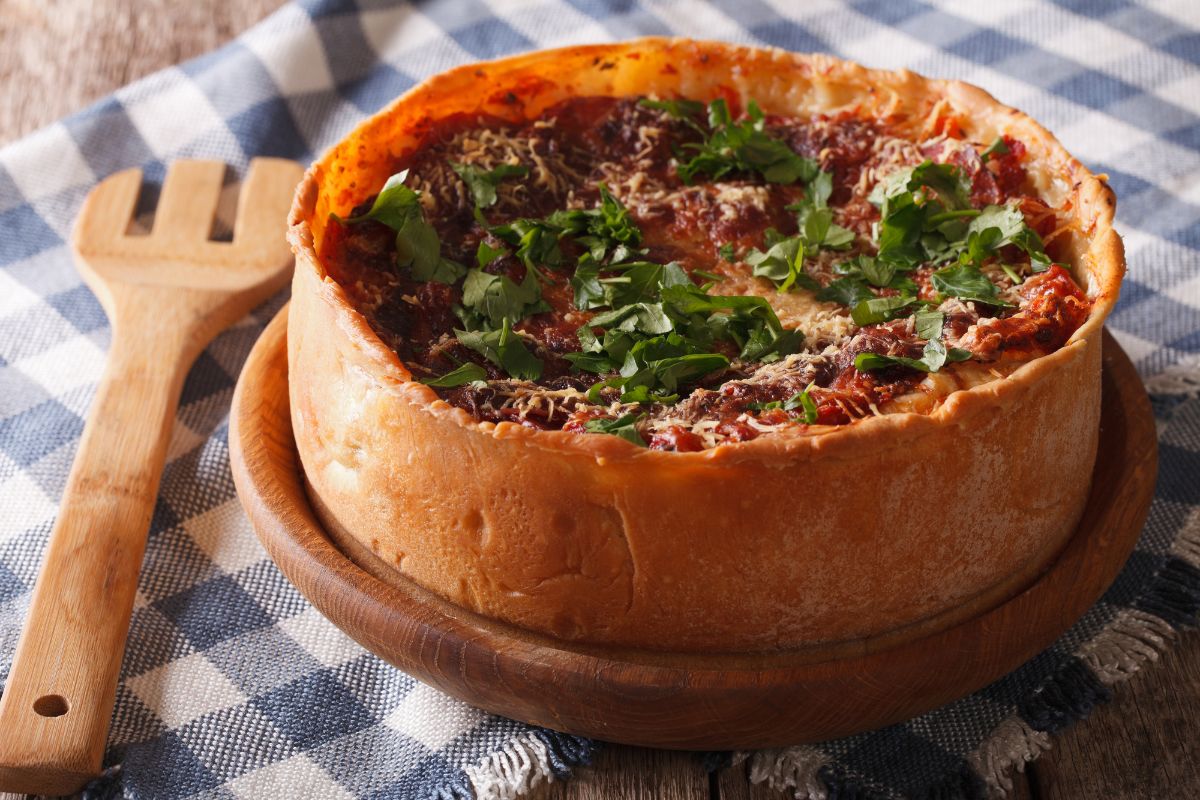 Thick crust pizza has the same thickness throughout the entire pizza. Therefore, it is best to hold up to the weight of sauce and any toppings you want. To be considered a thick crust pizza, it must be anywhere from 1/8 to 1/2 inch.

There are many different styles of pizzas that are also regarded as thick crust pizzas, like Chicago and Sicilian. The pizzas have a slight edge to hold in all the sauce, cheese, and toppings.

A thick crust is typically rolled out on a cutting board and then molded into the shape of the pan that will bake it. Thick crusts pizza often has bulky toppings, like meat, sausages, or vegetables. However, they can support the weight of these toppings with no issues. 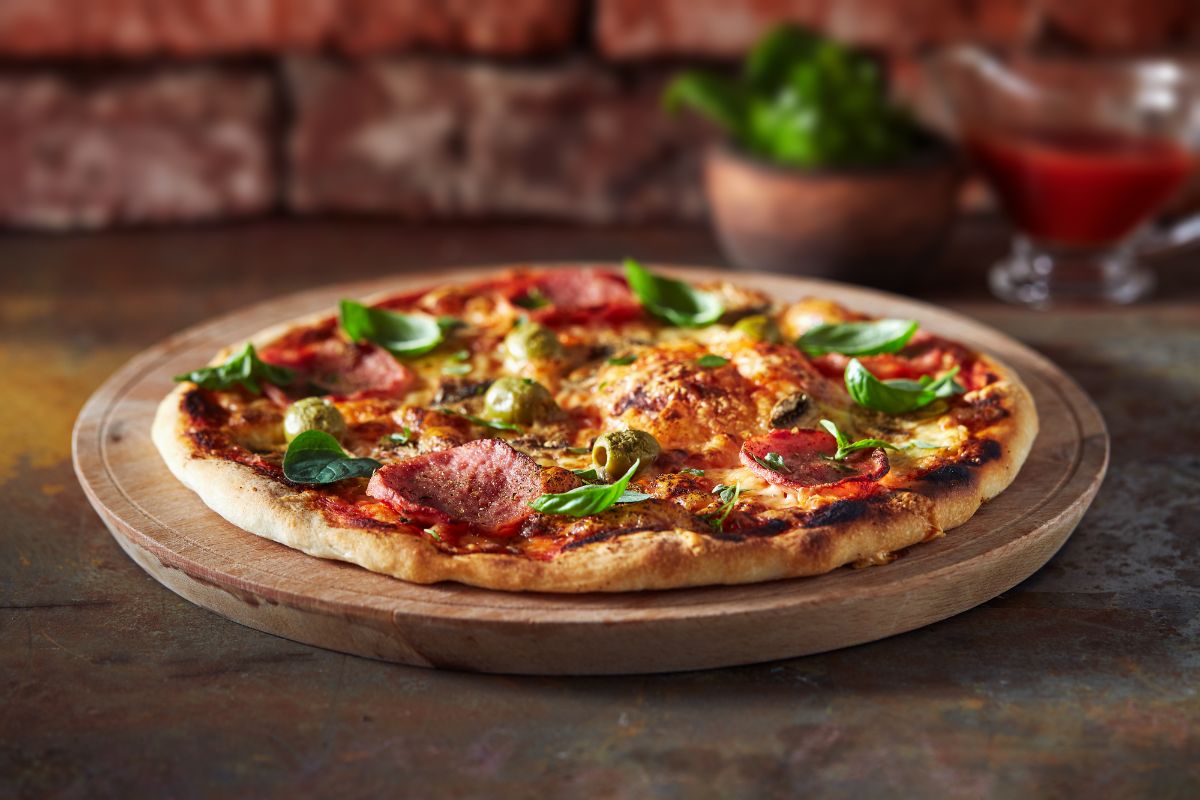 A think crust pizza is thinner in the middle where all of the ingredients, including cheese and sauce, are placed. Most thin crust pizza still has the thicker doughy edge that most of us associate with pizza.

Thin crust pizza does not typically have a large number of toppings because the crust cannot support them. Instead, a thin crust pizza has a chewy interior and crunchy crust that is similar to a cracker.